ESPN reports Wizards players may be available - is Bradley Beal an answer for Celtics?

By Tom Lane November 19, 2018
ESPN has reported that the Washington Wizards are sending signals to other NBA teams that their players, including John Wall and Bradley Beal, might be available via trade. Beal is a proven sharpshooter, particularly from 3-point range with a 39% rate of accuracy. The Celtics Danny Ainge may at least consider Beal as an addition to the Boston Celtics. 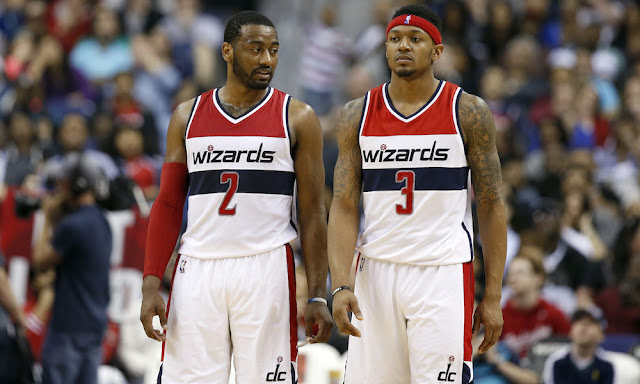 Bradley was chosen third overall in the 2012 NBA draft, and has been with the Washington Wizards since then. He is a 25-year-old guard and listed at 6'5" and 207 pounds. The Celtics have been experiencing some serious shooting woes this season, and Beal may cure some of that (per ESPN's Adrian Wojnarowski):

Coach Scott Brooks was fierce in his criticism of the Wizards after back-to-back home losses to Brooklyn and Portland this weekend.

"We got to just play with more enthusiasm, more effort, more energy," Brooks told reporters on Sunday night. "It's embarrassing."

The Wizards are 5-11, just two games ahead of tanking Atlanta in the Southeast Division.

Beal, 25, could turn out to be the guard with the most value on the trade market -- with his 3-point shooting ability, a more manageable contract, and being three younger than Wall. Wall's contract extension starts in 2019-20, which will average $42 million annually over the next four years.

Beal averages 21.5 PPG, 3.8 RPG and 3.4 APG this season. He is signed through the 2020-21 season when he will earn $29 million, a figure that may be a bargain at that time. Danny Ainge has many pieces in the form of young talent and draft picks. That is in Ainge's favor - his reputation as a wheeler-dealer around the League is not. But expect that Danny at least will consider a call to the Washington organization. He may be on the phone as I write this.