By Tom Lane November 19, 2018
Many in the NBA agree that Former Celtic, and present Laker, Rajon Rondo will make a fine professional coach upon retirement. Well, he isn't waiting for that. He is currently out of action with a hand injury, and he wants to be in on the coaching action. Coach Luke Walton said that is fine, but Rondo needs to keep his mouth shut in the huddles. 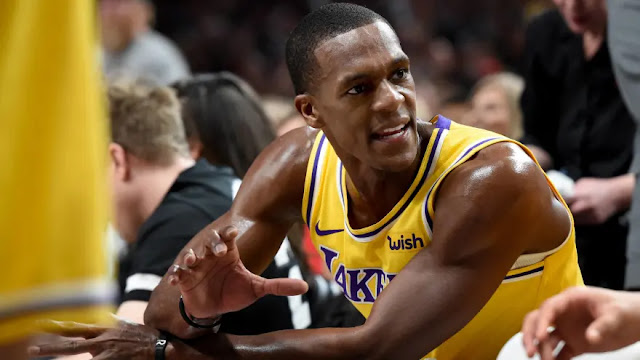 Rondo's teammates and coaches over the years have acknowledged Rondo's physical gifts, talent and understanding of the game. But they also understood he has a mouth. He is extremely outspoken. He and Celtics Coach Doc Rivers clashed, and he didn't get along with Mavericks Coach, Rick Carlisle.

Rajon does not like to sit still, and if he is forced to do so because of injury, he is going to lend a hand on the coaching end. But despite Rondo's physical and mental gifts, he can be an irritant, and it seems that is what he has become in the Lakers huddles (per LarryBrownSports Larry Brown):

Rajon Rondo was so into coaching the Los Angeles Lakers on Sunday night that Luke Walton had to tell him to zip it.

Rondo is out four-to-five weeks recovering from surgery to repair a broken hand. While he’s out, he’s tried to stay involved with the team by acting as if he’s a coach. He was holding a clipboard, huddling with the coaches during timeouts and standing up during the game.

The Lakers’ real coach, Walton, only allowed Rondo to be part of the coaches’ huddles if he kept quiet. Rondo confirmed that, saying he was told to shut up.

Rajon Rondo (broken hand) serving as a de facto assistant coach in this game.
He’s in the coaches huddles, has the clipboard, is standing during play - the whole deal. pic.twitter.com/4gzfCDg1qb

The Los Angeles Lakers have a real coach (Walton) and some assistant coaches - and now it appears they have another one. All he has to do is be quiet in the huddles.