By Tom Lane July 13, 2019
Second-round draft pick, Carsen Edwards, and the Boston Celtics have reached an agreement on a 4-year, $4.3 million-guaranteed contract. The final year of the contract is a team option. 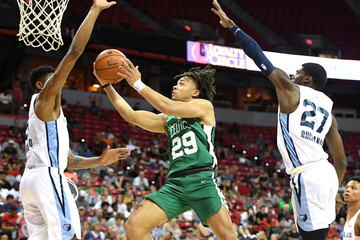 The length of the deal is rather unusual for a second-rounder, but Danny Ainge must feel Edwards is a keeper. So do I. This kid combines excitement and skills, and he is a determined, relentless scorer. He fires away with no hesitation or conscience, and his shot from anywhere can be deadly.

The #Celtics and second-round pick Carsen Edwards reportedly have agreed to terms on a four-year deal: https://t.co/ezSaFqK6Pi pic.twitter.com/AVX38Vfxbb

The Celtics roster is for 2019-20 is solidifying, but not yet in stone - never is with Danny at the helm. Watch for my article later today on the situations with Tremont Waters and Tacko Fall.

He's been a stud so far. I know it's "just" summer league but I had much more joy to watch these Summer Celtics than what we were forced to go through last season.
Still waiting for Tacko to get his shot. Maybe on a 2 way contract first to get develope a little?