By Tom Lane July 12, 2019
Hey look, I long ago learned not to get too hyped about Summer League results, and it frankly isn't the 4-0 record that gets me excited. It's the absolute dominance over the other teams - the tough, team-oriented play - and the hope that this lovable group is injecting into the loyal Celtics followers that went through bad times last season. 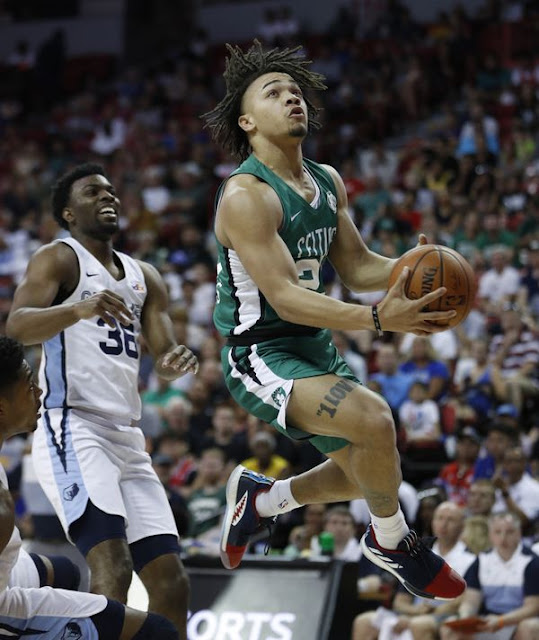 The 113-87 final score doesn't tell the whole story. That 26-point margin could have been wider. Boston played 12 guys, with 10 of them logging 13 minutes or more. The star of this contest was the TIMELORD (time to change that moniker? - vote in my Twitter poll or in the comment section), Rob Williams. He looked like an NBA vet in this one, scoring 16 points - hauling down 16 boards - and passing off for four assists. His teammates were finding him, and he was finishing with authority.

I have spent the last 26 years building physiques, and I will be doing a separate article today on my physical analysis of Tacko Fall and where he may be heading. After going undrafted, he will now be in demand. Last night he scored 12 points on 6-of-8 from the field, while blocking four shots (and intimidating many others). He may be a project, but he belongs in the NBA.

Grant Williams (G-Will to me), came away with his fourth straight team-high plus/minus, this time a +25. He notched 21 points on 6-of-10 from the field, and an encouraging 4-of-5 from 3-point territory. He also managed to keep his cool when the obnoxious Grayson Allen started to get too physical. Allen got ejected, and Grant remained on the floor to embarrass the Grizzlies.

I’d like to see Grant shoot this, but what a pass/quick decision by Rob Williams. Probably an underrated skill for him. pic.twitter.com/eVuX0Ersrv

Carsen Edwards? Same old stuff. A total of 15 efficient points from all over the court, along with three rebounds and two assists. He fires away without conscience from anywhere with a quick release, either on the move or catch-and-shoot. He will drive opposing defenses nuts once he becomes acclimated to the Big League.

Edwards' back court mate, Tremont Waters is clever as they come for a rookie. He handed out a team-high nine assists last night, and he always seems to make the right play. One other bonus was the play of Max Strus, who along with Waters, is signed on a 2-way contract. Max put up 13 points on 5-of-10 from the field and 3-of-7 beyond the arc. There are a number of solid NBA-level players in this summer crew. Can't wait to see how it all plays out.

After Rob Williams exciting double-double showing last night in Summer League play, it may be time to change his TIMELORD moniker.