By Tom Lane July 10, 2019
Some say an NBA team can't have too many wings in today's game, but the Boston Celtics are pushing the limits. The wing core consists of Gordon Hayward, Jayson Tatum and Jaylen Brown - backed up by Daniel Theis, Semi Ojeleye and Guerschon Yabusele. Marcus Morris is gone via free agency, but here come rookies Grant Williams and Romeo Langford . 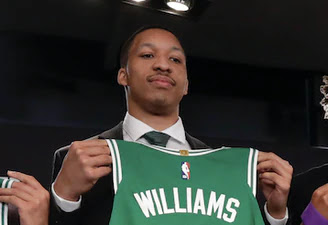 Theis, Ojeleye and Yabu all saw limited minutes last season and may once again if G-Will is as good as he has shown in Summer League. In three contests thus far, Grant has averaged roughly 11 PPG, 7 RPG, 2 APG, 1 SPG and 1 BPG. What may go unnoticed is that he has led his team in plus/minus in the three games, all wins for the Celtics. He has averaged a +19 over a span of 61 minutes in the three contests.

I could be wrong and premature, but I don't see Guersch as a long-term NBA player. He is still young, and a trade to a rebuilding team might be a better venue for him. If Daniel is fully-recovered from his meniscus tear, he may see more floor time this season. I would like nothing better than to see a breakout from Semi this time around. He is a terror for opposing players on the defensive end, but his offense still needs work.

G-Will seems talented, versatile, mature and of high character. He can do it all, seemingly with consistency. To be honest, what really sold me on him was the Dave Cowens-like fake-one-way-and-spin-to-the-other for a score in the post. Not saying Grant will be the next coming of Big Red, but he belongs in green.