Guerschon Yabusele had to go - so what's next?

By Tom Lane July 11, 2019
Danny Ainge is playing another numbers game here, and he just made a necessary move by waiving third-year forward, Guerschon Yabusele. With the logjam at the wing position - the success of the Summer League crew - and the disappointing play of Guersch as a member of that unit, meant the writing was on the wall. Yabu had to go. 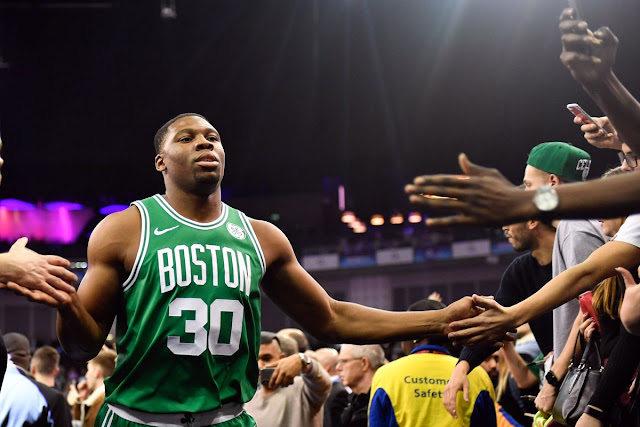 Frankly, it was painful to watch Guersch in action for the three Summer League contests, all wins for Boston. He looked slow and uncertain and was being outplayed by many of his teammates with zero NBA experience. The Celtics may have to eat his $3.1 million for this season, but it had to be done. So where does that leave us.

Danny already has Max Strus and Tremont Waters locked up on two-way contracts. Grant Williams looks like he can contribute right away and should be heading to a standard contract. As a second-rounder, Carsen Edwards' deal is not set in stone, and Ainge can attempt to negotiate any contract that is agreeable to both parties. He hasn't lost a beat in moving from college ball to Summer League. He is a prolific scorer that seems to be a pairing of Isaiah Thomas and Vinnie "The Microwave" Johnson, nicknamed by our own Danny Ainge.

Javonte Green can't be ignored here (are you seeing the numbers dilemma?). I haven't determined yet if he is just another superior athlete or a future NBA star. Danny doesn't know either, but he may not want to let him get away.

And how about the new fan delight, Tacko Fall. Like Green, no one is quite sure what this giant of a man has for a ceiling, but he sure as hell has already outperformed expectations in Summer League. He is currently on an Exhibit 10 contract which may net him a bonus of up to $50,000 if he signs with the G-League. He could also end up replacing Strus or Waters on a 2-way deal - or even eventually be signed to a standard NBA contract.

My feeling is that Ainge signed Yabu to an extended contract in preparation for a trade that never happened (read Anthony Davis here). Danny may have word that another team is already prepared to pick him up, but his poor showing this summer may have destroyed that possibility.

SN: Semi Ojeleye not playing with y’all this year pic.twitter.com/CuqNYkeTwm

For Boston, the point guard position seems fairly solid, and the wing position is star-quality but remains clogged. The center spot has the bodies, but I doubt Ainge is totally happy with it as it stands right now. He most likely has his sights set on getting out of the East in the post-season, and that means matching up with the front courts of both Milwaukee and Philly.

The "what's next" part of my title brings to mind Semi Ojeleye. Going into his third year on a $1.6 million deal, my thought is that he should stay put. His meager salary doesn't make a trade likely unless it is to create more roster space. I see him as a late-bloomer possibility, and if so, Danny may make a mistake sending this premier defender elsewhere. This roster will not look exactly the same on opening night, and its specific look is up in the air. But I think we will fall in love with this team, and as Kevin Garnett once said, "Anything is possible."