In a contract year for Jaylen Brown, first few months of the season will decide the outcome

By Tom Lane July 17, 2019
Both the Sixers' Ben Simmons and Nuggets' Jamal Murray are being extended from their rookie contracts for five years and $170 million. A third member of that same 2016 draft class, the Celtics' Jaylen Brown, can't expect the same from Danny Ainge - at least not yet. Extending players on rookie contracts is a rare occurrence for Danny. It could still happen, but not before Ainge gets to analyze Brown's play this coming season and how that performance meshes with the rest of the team. 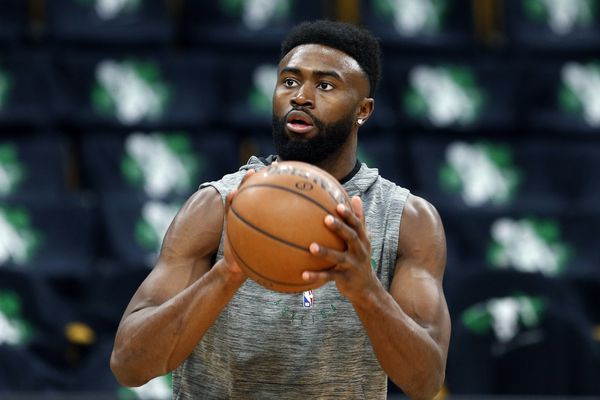 Jaylen's minutes were reduced significantly last season from his 2017-18 campaign, and his numbers dropped accordingly. Still, on a per-36-minute basis, he showed 16.4 PPG, 6.8 RPG, 1.3 APG and only 2.0 TOPG, while hitting 51% on field goals, 35% on treys and 77% on free throws. With increased floor time and improvement in specific areas (read: passing), Danny may break down and lock him in long-term, maybe before he looks as old as this image projects.

With Kyrie Irving, Al Horford, Marcus Morris, Terry Rozier and Aron Baynes gone from the scene, a lot of new faces means a fresh start - and uncertainty about roles. That wing position is indeed crowded, and allotting significant minutes for everybody may be impossible. And that may mean a trade. Danny has the daunting task of determining what lineups will produce optimum results - and that means a long playoff run.

Jaylen is only 22 years old, and General Managers around the League drool over 6'7", young, talented wings. NBA talents are human. Many tend to sulk and feel not wanted when they think they are being ignored. With all the turmoil and hard feelings from last season, Ainge may want to lock in Jaylen early, but don't count on it. I see the trade deadline as the earliest we would see an extension for Brown, and even that is unlikely. Danny needs to see what he's got in this team.