In quarter-final loss to Grizzlies, Tremont Waters and Carsen Edwards show they belong

By Tom Lane July 13, 2019
The Celtics 94-88 loss to the Memphis Grizzlies in the Summer League Quarter Finals meant little. Wins and losses in the off-season have little significance. What matters are the youngsters and how they respond to elevated pressure. My hat is off to the Diminutive Duo of Tremont Waters and Carsen Edwards. I was literally on the edge of my seat, and that rarely happens for any NBA summer contest. 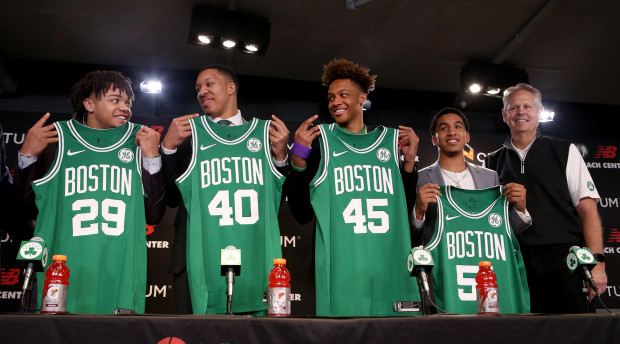 When tragedy strikes, the smart lesson is to try to follow your normal routine. Well, this game was two days after the horrible suicide of Ed Waters, Tremont's dad. Let me say that the suicide of a loved one results in trauma that death from a fatal accident or illness can't match. Despite the trauma, Tremont stepped on the court and played a team-high 32 minutes and came away with a team-high plus/minus of +7. That is fortitude at a young age.

I wrote earlier today about the possibility of Carsen Edwards taking over Danny Ainge's Celtics All-Time-Gunner Award. Kevin McHale called his buddy Danny "one cold-blooded character", referring to his habit of sending his guys packing. But Ainge was never this cold-blooded when it came to shooting. You mean to tell me this guy shouldn't have gone in the first half of the 2019 draft? In only 24 minutes he put in 25 points, took down eight rebounds and came away with a plus/minus of +2 in a 6-point loss.

Carsen Edwards put on a show in the 4th 🔥

Realizing this is not NBA regular-season level of play, I love what I see from these kids. They give us hope, as fine young people often do. Stay with us right through the regular season and playoffs. Like this terrific summer crew, we won't disappoint.