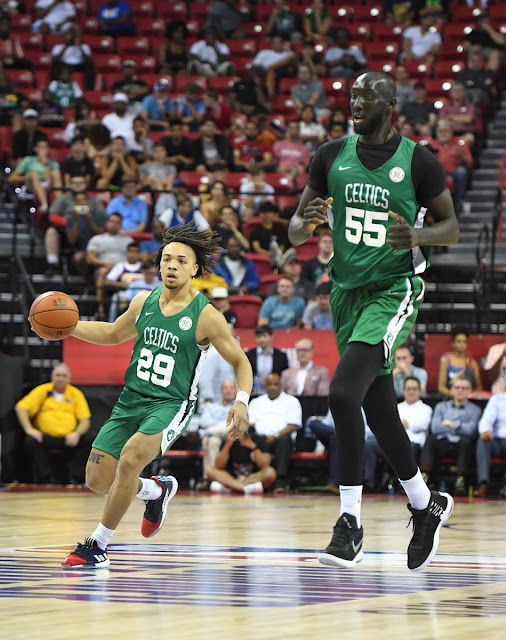 Tacko Fall's potential as a solid NBA player starts with his size. Anyone over 7-feet can be classified as a giant, but Tacko surpasses that. he is 7'7" with an 8'2" wingspan and a 10'2" standing reach. He can cover an 8'-by-10' wall just by spreading his feet and waving his arms. Shooting over him or passing around him will be a challenge for opponents.

But it doesn't end there. He doesn't run the floor like 6'9" Bill Russell did, but he is not far behind. He is smooth and fluid for a (very) big man. And he has soft hands to catch and retain a pass and place it (yes, place it) in the basket. Is he destined to become a true NBA player? A Celtics staffer thinks so.

Asked a Celtics staffer if Tacko Fall is an NBA player. The response: “I think he’s worth an investment for sure. If he improves this season anywhere close to his improvement the last few months then I think it’s hard to argue against him.” He’s been in Boston working all week.

During Summer League, I watched as he covered opponents out by the foul line. He moved quite well out there, particularly for a man his size. Can he shoot from any distance? Not really - not yet, but he I watched as he did a pivot move and sank a jump hook from about 10-feet out. Barring injury, expect him to improve.

6’11 Enes Kanter(@EnesKanter )praying next to 7’7 Tacko Fall in Boston pic.twitter.com/AzUmnr9hK5

Danny Ainge really needs to lock him in if that is doable. He may wash out down the road, but watching him thrive on a rival team would not sit well with Celtics fans. A 7'7" fan favorite that has already shown improvement in Summer League seems to have a place in the NBA. We will keep our readers posted on any movement on Tacko's contract.

Fall the Wall. He stands tall (literally), but I mean he stands quite straight which is good for a person his height. He moves quite well & his turnaround jumper looked like Kevin Garnett's. Tommy Heinsohn would love him. Give him the ball, let him go to work in the paint!