Report: Guard Javonte Green to be signed to partially-guaranteed contract by Celtics

By Tom Lane July 18, 2019
It is becoming obvious that the Celtics 15th roster spot is really being put up for grabs. Will it be Tremont Waters, Tacko Fall, a veteran - or Javonte Green. Danny Ainge is covering all the bases on this one. In Summer League, Green averaged 10.0 PPG, 4.0 RPG 2.8 APG and 1.8 SPG. He is a 25-year-old superb athlete who went undrafted in the 2015 NBA draft. 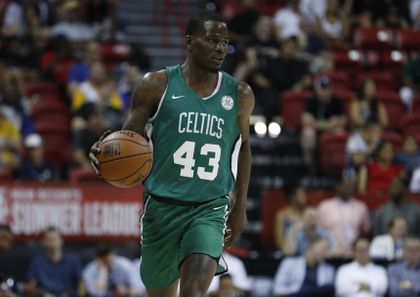 Javonte Green is planning to sign a 2-year deal with the Celtics, with a partial guarantee in year 1 and non-guaranteed year 2, per source. I've been told by multiple sources that the Cs plan to have several players, likely partial & two-way contract guys, vie for the last spot.

The Celtics have offered a partially-guaranteed contract to Javonte, and it looks like he will be fighting for that final roster spot in training camp. Boston is still trying to lock in Tacko Fall, moving on from his Exhibit 10 contract, and Tremont Waters is another candidate for the 15th slot. And potential veteran buyouts still hang in the air.

Ainge is juggling several balls in the air at the same time, while hoping that a rival GM doesn't snatch one during his act. Green may never appear in green, but Danny is taking no chances. Is Javonte just another superb athlete that won't make in the NBA (read: Kedrick Brown), or is he a solid role player in the Celtics schemes for 2019-20? Ainge is taking no chances. Training camp will sort things out.