By Tom Lane July 12, 2019
The summer trade frenzy continues with Chris Paul and future draft picks going to the Houston Rockets for the Thunder's Russell Westbrook. Make no mistake - this one is big. The Rockets back court with two recent MVP candidates may now be the best in the NBA. 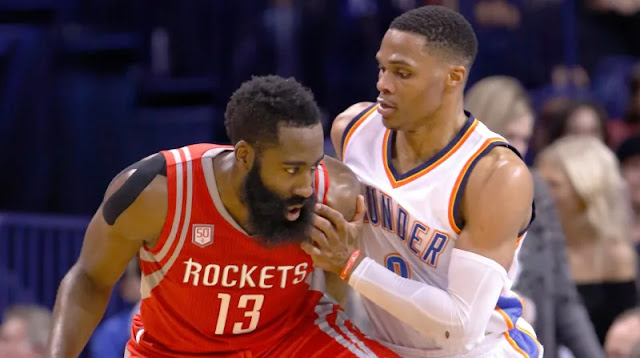 ESPN story on blockbuster deal reuniting former MVP's Russell Westbrook and James Harden on the Houston Rockets -- with CP3 on his way to the Thunder. https://t.co/605aNR69IQ

CP3 is not expected to remain in Oklahoma City for much more than a cup of coffee, and Miami, or even Milwaukee, could be his next destination. This deal makes the Rockets a legitimate Title contender to go against other superstar pairings that have taken place in the West. They will now contend with the Clippers Kawhi Leonard and Paul George, in addition to the Lakers Lebron James and Anthony Davis.

After the Rockets were eliminated this postseason, James Harden said he knew exactly what the team needed to do to get over the hump. pic.twitter.com/Ve4zCBe3bB

it worked when KD led that OKC team while Harden was more like a sixth man.
Now Harden and Westbrook both are ball dominant, I don't know how this will work

Was this the deal that James Harden was referring to in order to get over the hump in pursuit of a Championship. We may never know the answer, but this trade makes them better. NBA coaches across the League are already plotting how to slow down this most-recent of superstar pairings that have become a trend in the Western Conference.