By Tom Lane July 17, 2019
The Celtics point guard position is secured with Kemba Walker and Marcus Smart in command, and Brad Wanamaker and rookie Carsen Edwards as backups. The wing slots are more-than-filled with Jayson Tatum, Jaylen Brown, Gordon Hayward and draft pick Grant Williams. We might include rookie Romeo Langford in that group after we see him in pre-season play. Smart also can migrate to the wing position in certain matchups.

The 5-spot remains an issue. Danny Ainge has ably replaced Aron Baynes' grit and grind with the additions of Enes Kanter and European Vincent Poirier. Both can bump, rebound and score down low, but don't expect them to hit from any distance or defend on the perimeter - at least not yet. Those are two areas where the now-departed Al Horford excelled. 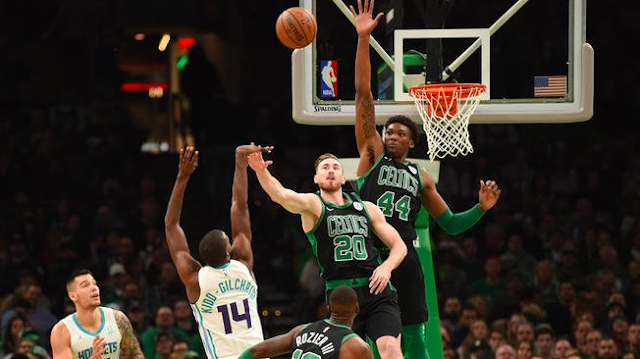 Is second-year man, Rob Williams, a solution. He can catch and finish with lobs, rebound and protect the rim, but he is still a work in progress. His 3-point shot? Doesn't have one - not yet. You may be noticing my "not yets". There is work to be done in training camp and pre-season play.

Sometimes we may forget about Daniel Theis. In his rookie season, he kept improving until he was laid low by a meniscus tear. Last season, he saw his usage drop, but he did hit 20 of his 67 3-point attempts for a 39% average. In college, Grant Williams was not known for his long-distance shooting, but on July 11 versus the Grizzlies he nailed 4-of-5 treys in Boston's 113-87 win.

Celtics fans, this is what you get in @EnesKanter ☘️ pic.twitter.com/N1wYpqmma4

Poirier is a major question mark. In Euroleague competition, he showed he can rebound and block shots (1.3 BPG in 21 minutes). Whether he can equal that in the NBA is still up in the air. Will we see the Rob Williams that put up a double-double (16 points, 16 boards) with four assists against the Grizzlies on July 11. Enes Kanter may not be the perfect answer for the Celtics at center, but we know what we will get from him. His stint in New York last season showed 14.0 PPG and 10.5 RPG in only 25.5 minutes/game. And he hit free throws at an 81% clip.

Can't wait to see @viinze_17P rattling the rims here in Boston. Celtics fans are going to love the way he plays!https://t.co/YQPqL0ZyIM

No, I didn't forget about Green Giant, Tacko Fall. At very least, we will see him in the G-League, and a 2-way contract is probable if Tremont Waters is elevated to a standard contract. But a regular spot on the Celtics roster for Tacko is not in the cards. Not yet (there's another one). Danny Ainge is a summer trader, but this season may see a change. He needs to see what he can expect from Vincent and Rob and proceed from that point. We may see a mid-season trade if Danny sees an opportunity to improve the team. But prepare for a few more moves prior to training camp.