Did the Celtics Kevin McHale really have a wingspan of 8-feet?

By Tom Lane August 21, 2019
According to many sources, the Celtics Kevin McHale did indeed have an estimated wingspan of 8-feet. One of those sources is Wikipedia, as seen below:

Kevin was listed at 6'10" tall when he was drafted with the 3rd pick in the 1980 draft. Red Auerbach, in yet another heist, brought in both McHale and center Robert Parish (via trade) prior to the Celtics' 1980-81 Championship season. Parish at 7-feet-plus and Larry Bird, at 6'9", finished out the famous Big-3 front court for Boston. The photo below of the Celtics trio might make us start to believe that Kevin did display one of the largest wingspans in the NBA's history. Larry's fingertips are at the lower seam of his shorts, and Robert's go an inch-or-so lower. Kevin's fingertips appear to end up significantly lower than Parish's. 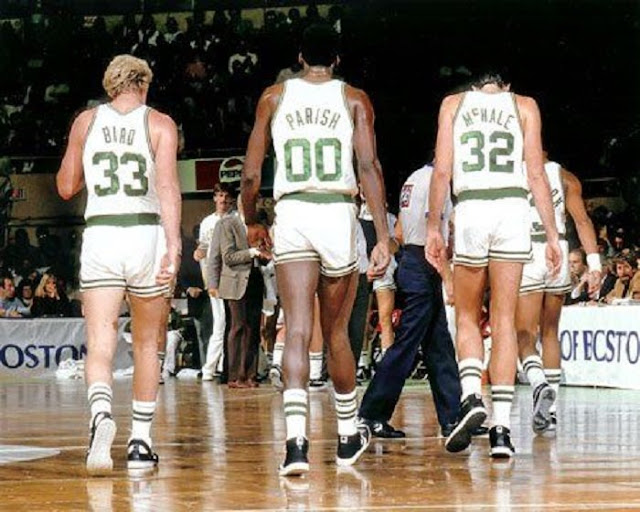 McHale used the long arms in many ways, one of which was to grab an offensive rebound - keep the ball high and out of reach - and score on a put-back. Besides being a 3-Time NBA Champion and 7-Time All-Star, McHale was a 3-Time All-Defensive First team choice and 3-Time All-Defensive Second-Team pick. His enormous wingspan made him a holy terror near the hoop on both offense and defense. He was a 1-on-1 nightmare at both ends of the court.

And it is notable that Kevin's long reach also came in handy for one specific incident - his clothesline of The Lakers Kurt Rambis in Game 4 of the 1984 NBA Finals. The play literally turned the post-season around for Boston, and they went on to win the Title

On a CSNNE Toucher and Rich broadcast, Danny Ainge stated that he emphatically told his Celtics teammates after the Game 3 loss that, "We gotta take some hard fouls."

"I'm booed in every arena in this League because I'm the only guy that takes hard fouls. I need some of you guys to take some hard fouls."

No one knows for sure if Kevin's wingspan was 8-feet, but he was damn long. He wasn't known as a rough player, but he was in that specific case. Kevin listened to his buddy Danny and did the dirty work. And it paid off.