By Tom Lane August 07, 2019
It happened in 1962 during Game 5 of the Eastern Finals that pitted Bill Russell's Celtics against Wilt Chamberlain's Philadelphia Warriors. Boston took the game, but it was Sam Jones' hard foul on Wilt that really got the crowd's attention. Wilt, all 7'1" of him, was pissed and went after Sam - who promptly snatched the closest weapon available - a photographer's stool. 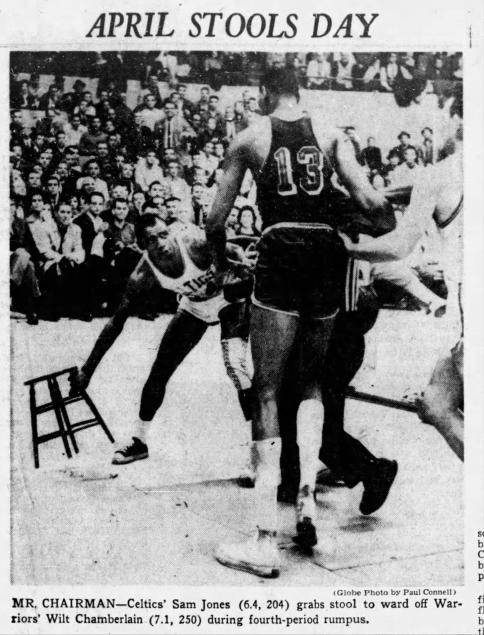 I interviewed former Celtics great Sam Jones, and the author of his biography, Ten Times a Champion, Mark C. Bodanza, last year. It was fun, informative and a bit tense on one subject. I loved all of it. Sam told me that Chamberlain threatened that he was going to make Jones eat that stool. Russ and Sam's other teammates came to his aid, and things calmed down after that.

Sam was picked up the next day by Wilt and they had dinner together with Wilt's mom. When Wilt's mother asked Sam what he intended to do with that stool, he answered:

"I was going to break your son's legs, ma'm. He was trying to kill me."

"Wilt and I were always good friends. (But for the next game) He told me not to come into the lane."

There are many other gems in Bodanza's bio of Sam Jones. How Red Auerbach used to pick on Tommy Heinsohn and even fined Sam for eating pancakes. I advise any Celtics fan to pick up a copy.