By Tom Lane August 17, 2019
Make no mistake about this. Success and the limelight bring jealousy and even hatred. One of the most successful NBA coach/executives in the 1950's and beyond was Red Auerbach. He was smart. He was shrewd. He took chances. And the Boston Celtics just kept winning.

To this day, I swear that the envy and dislike continues. Red's mortal self has left us, but the issue remains. I posted an article a few days ago focused on ESPN's projection of a starting USA Basketball lineup when the crew travels to China. Despite the fact that Kemba Walker started last night's game once again (versus Spain), ESPN's starting-5 did not include one Celtic. Yes, the envy and dislike persists. I believe the photo below is to blame. 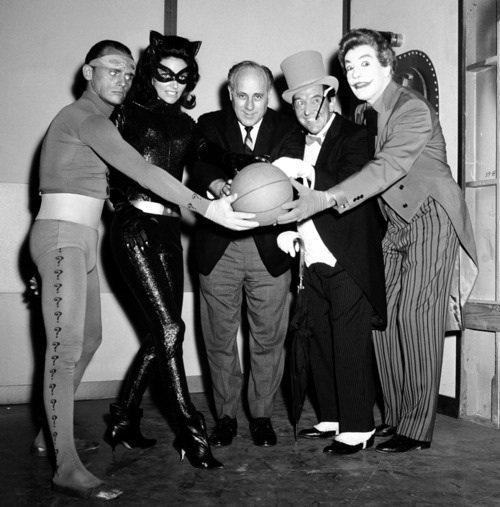 Red is pictured smack-dab in the middle of villains from the Batman TV series. We have Frank Gorshin as The Riddler, Julie Newmar as Cat Woman, Burgess Meredith as The Penguin, Cesar Romero as The Joker - and Red Auerbach as - well, himself. Red doesn't belong there. The nasty Rick Pitino would fit, but not Red. Auerbach was more victim than villain. The Celtics have not won a Title in 11 years. Time for the jealousy and hatred to stop. Damn photo!!!