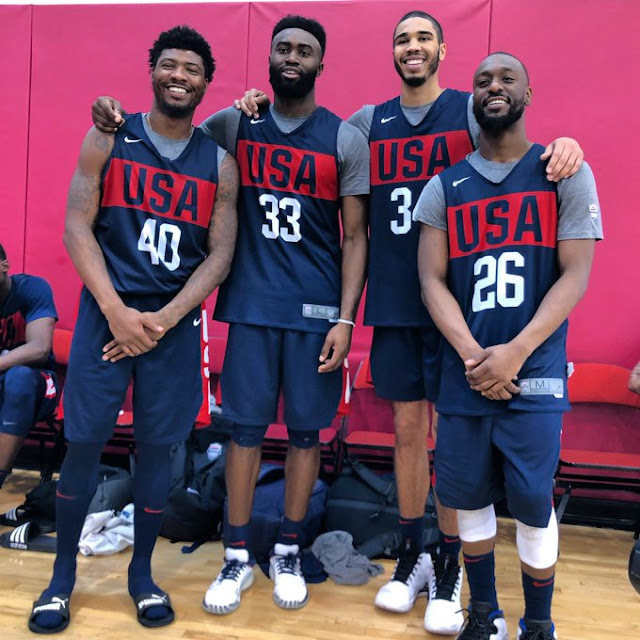 Gregg Popovich currently has a 15-man roster that needs to be cut to 12 prior to tomorrow's departure for Down Under. As of this writing, these are the players for Team USA:

The Celtics 4-man Team Shamrock remains intact, and it appears that Pop will certainly go with Kemba Walker and Jayson Tatum. Marcus Smart has been out of action with calf tightness, but my guess is that Popovich wants Smart's versatility, defense, energy and intensity to lessen the chance of another lethargic performance by Team USA.

Jaylen Brown remains the question mark. Will he be one of the three team members to get the ax? For his sake, and that of the Celtics, I hope not. From the time Jaylen came on board with Boston, he has seemed to be the victim of introspection, thinking too much and not simply reacting out there on the court. Getting cut from USA Basketball - having to leave his teammates behind as they battle for a victory for their country - would be a major blow to him as he approaches a contract season.

So which three players might be casualties come decision time? Joe Harris may be one of them. Mason Plumlee and P. J. Tucker could complete the trio heading home. I don't see Smart getting cut unless his calf issue persists. The Spurs Derrick White is a possible candidate for deletion, but he has performed well of late. Jaylen? I think he needs a decent showing in tonight's game versus Spain. He didn't exactly excel in last week's intrasquad scrimmage, and he needs this game badly. Stay with us for coverage of tonight's contest and Pop's final roster decisions.