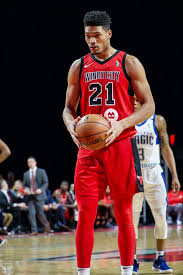 The Boston Celtics will be signing former Xavier forward, Kaiser Gates, to a training camp contract. The 6'8" forward left Xavier after his junior year but went undrafted in 2018. He played for the G-League Windy City Bulls last season, averaging 12.7 PPG and 6.4 RPG.

The Boston Celtics are signing former Xavier forward Kaiser Gates to a training camp contract to compete for the 15th roster spot along with Tacko Fall and others, league sources tell @TheAthleticNBA @Stadium.

Being that Boston is loaded at the wing position, it appears unlikely that Gates will be able to grab that final 15th roster slot with the Celtics. But this does give the versatile youngster another chance to demonstrate what he can offer at the NBA level.

Kaiser does many things quite well, but nothing truly stands out in his overall game. But it is noteworthy that in his junior year at Xavier, most of his shots were launched beyond the arc. He put up 143 potential 3-pointers and hit 54 of them for a 37.8 percentage rate. Conversely, Gates only attempted 36 shots in that same 2017-18 season, hitting 20 of them at a 55.6% rate.

Unless he becomes a major surprise in Celtics training camp, I frankly can't envision Kaiser forcing his way into Boston's final 15-man roster - at least not yet. His size and frame are just what Brad Stevens looks for at the wing position, but he has not shown NBA potential against lesser competition in the G-League or Summer League. He has a history of not attacking the rim, and he seems a bit slow at getting his shot off. Those two factors could mean suffocating coverage in the Big League.

Despite what may seem a difficult road ahead for Gates, Danny Ainge is bringing him to camp for a reason. The Celtics' two 2-way contracts are already filled with Max Strus and Tremont Waters. And news on Tacko Fall has been mighty quiet of late. Kaiser Gates may be a late bloomer, and the invitation to Celtics training camp could be just the opportunity he needs in his search for an NBA career.