By Tom Lane September 28, 2019
The Boston Celtics second unit this coming season will be probably see Marcus Smart at point guard and Semi Ojeleye at small forward. But don't expect to see them glued to those positions. Both players are physically powerful and can guard virtually any position on the floor. Marcus was needed in the starting five last season because there was little energy out of the gate from the appointed first unit. This season, he is needed to lead the second unit with his playmaking, defense and ferocious defense (per NBA.com's Taylor C. Snow):

The Celtics may have one unique asset that no other team in the league would: an All-Defensive First Teamer coming off the bench. Leading Boston’s second unit, once again, could be the one-of-a-kind defensive mastermind, Marcus Smart.

After years of wreaking havoc against opposing offenses, Smart finally earned his first All-Defensive nod last season, while also earning the most Defensive Player of the Year votes among all guards. One of the contributing factors that allowed him to take a step forward in the voters’ eyes was his improvement in the steals department, as his 143 snags placed him third in the league behind Paul George and James Harden.

Most of Smart's sometimes-reckless play is in the past. He shoots better - is less unpredictable - and his turnovers were down last season. He will take on any role - any task - any opponent of any size - and carry out the task without complaint. Danny Ainge loves him for that. 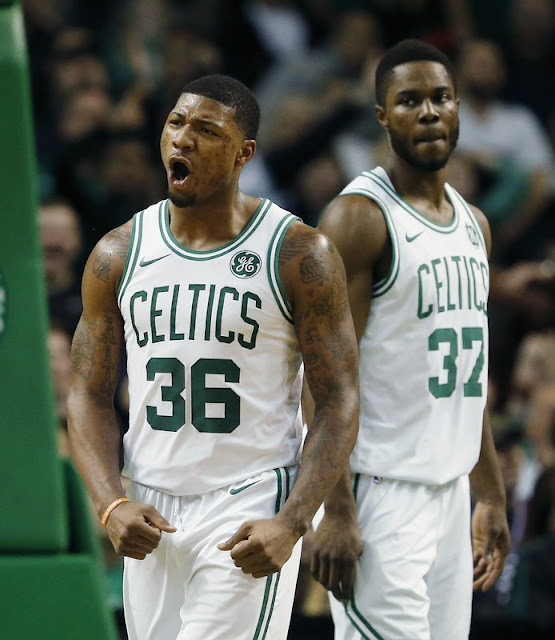 Semi Ojeleye is coming into his third season with the Celtics. He has been a lock-down defender from the start, but he needs to improve his shooting and rebounding this season. But like Marcus, he is so versatile. There will be times when Semi takes on the opposing center, and Smart plays the four-spot (per NBA.com's Marc D'Amico):):

Semi Ojeleye is a great piece for any team to have in its rotation. He’s a strong and versatile defender who is willing to accept any role. That’s a rare combo.

Ojeleye, who is entering his third season, has been called on at times to step into the lineup and serve as the team’s primary defender against the likes of league MVP Giannis Antetokounmpo and others. He has performed well in such a role, and there’s no reason to expect anything different this season.

Semi has yet to show his marksmanship in the NBA, but he averaged 53% from the field and 42% on treys in his 3-year college career. He was projected to be a 3-and-D option with Boston, and that may happen this season.

One possible second unit for Boston would be Smart and Ojeleye alongside Vincent Poirier, Daniel Theis and either Romeo Langford, Carsen Edwards or Brad Wanamaker at shooting guard. That high-energy quintet could wreak havoc with opposing teams. Let the season begin.