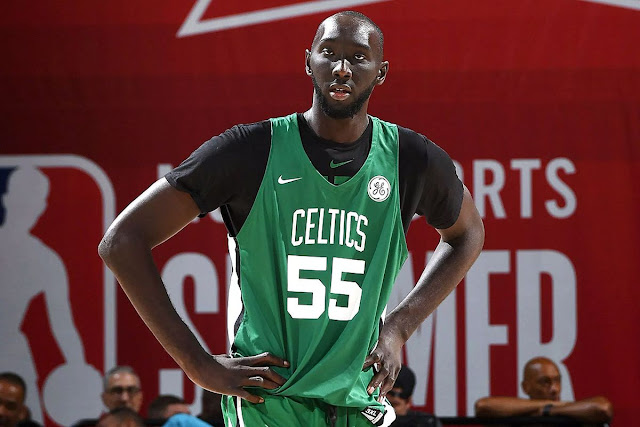 After Tacko Fall failed to be drafted in the 2019 NBA draft, Danny Ainge moved in to sign the 7'7" giant to an Exhibit 10 contract. That contract does not guarantee that the big man will remain in Boston. If he is not signed to the 15th-and-last Celtics roster slot, he has to be waived by Boston - at which time any other team can sign him to their own contract. He can be given a $50,000 bonus is he agrees to join the Celtics G-League affiliate Maine Red Claws, but his agent, Justin Hayes, is saying that may not be good enough (per Boston Globe's Adam Himmeslsbach):

The Celtics believe that with further development Fall could become an NBA contributor. But it’s unclear if they want to keep a development project on the roster. That’s where things become tricky. Fall signed an Exhibit 10 contract, meaning he will receive a $50,000 bonus if he is waived and agrees to then join the Maine Red Claws. But Fall’s agent, Justin Haynes has insisted that Fall will be picked up by another NBA team before that happens, and that has been reiterated to the team recently, league sources said.

Fall is still very raw, but he is also VERY BIG. He moves exceedingly well for a 7'7", 310-pound figure - dunks the ball on his tip toes - catches the ball on lobs high enough to evade most defenders - and could be a shot-blocking menace. But he is a poor free throw shooter - has no outside shot - and projects to have questionable success at perimeter defense.

But his ceiling is totally unknown by most NBA analysts, and Ainge must be very reluctant to let him escape unless he feels there is no significant future in keeping the Green Giant.The impending Summer League will tell a lot - but not all. Rival GM's have already seen enough in Fall to be at least interested in him. A good showing in Summer League could enhance that interest to a level of fascination. Therein lies Danny's dilemma.

Will Tacko take the $50,000 bonus and go to Maine? Or will he want at least a two-way contract, whereby either Tremont Waters or Max Strus is waived or elevated to the 15-man roster? But he could demand a standard Celtics contract with the threat of giving the team a see-you-later response and head elsewhere if he is waived by Boston.

It all comes down to a step-at-a-time. Summer League is about to start, and we will have a chance to watch the Green Giant in action against tough competition. That will be Step #1 in the question of retaining Tacko or letting him go. Boston has never seen anyone quite like him. I hope he sticks.