Al Horford opens up about his departure from Boston

By Tom Lane October 10, 2019
I had promised to leave last season behind - unless new information surfaced that had significant importance. Well, here it is. This concerns the dearly (not so dearly?) departed duo of Al Horford and Kyrie Irving. Sports writers often take a player's specific statement - tear it down and apart - and give their own interpretation. I will try to avoid that.

The Boston Herald's Steve Bulpett sat down with Horford to find out why he left Boston for the rival Philadelphia 76'ers. Al discussed the usual stuff about money and winning Championships, but the kicker came with Hordford's comment on Kyrie's Irvings departure and Kemba Walker's arrival.

As far as on the court, it’s certain Horford wasn’t interested in playing another hand from the same deck. I asked him if his decision would have been different if Irving had remained.

“I’m not sure that has anything to do with it for me,” Horford said. “I just think that if Kyrie would have stayed, I don’t know if it would have worked. There would have had to be some major changes as far as players, because it was just clear that the group that we had just wasn’t going to be able to coexist.”

And what about if he’d known Kemba Walker was coming. Horford paused.

“I don’t want to get caught up in the past,” he said, “but, yeah, that would have been totally different.”

As one who has elicited confessions from suspects on awful crimes such as rape, incest, armed robbery and manslaughter, my hat goes off to Steve Bulpett. His manner with interviews appears to be exquisite. So what do I get out of this?

What I learned as a Police Investigator is that nothing is ever what it appears to be. An obvious take on Al's interview might be that the blame rests on Kyrie's shoulders, but I am not choosing that route. Horford, above all else, is the ultimate gentleman. The turmoil of last season had to be too much for him to think of repeating it. I can't place the bulk of the blame on Kyrie, because frankly, I happen to be somewhat like him in intensity - often trying too hard to make things work. 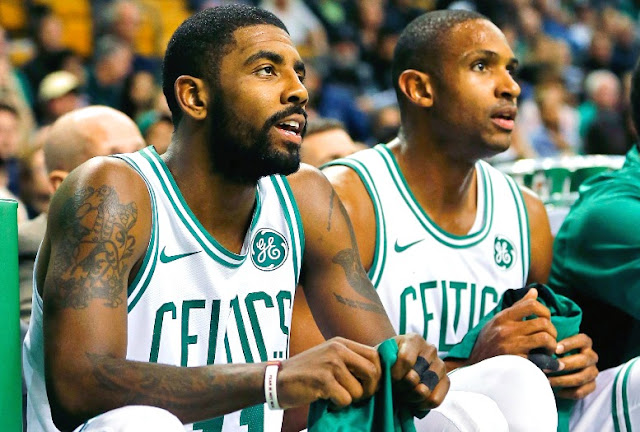 And Al indicating that knowing that Kemba was on his way "would have have been totally different" means to me that last season was a bad mix, particularly between Irving and the young guys, and Walker's arrival may have solved some, or all, of that. Nothing more- nothing less. As Al said, "...it was just clear that the group that we had (last season) just wasn't going to be able to coexist".

Kemba's attempt at leadership will be less intense than Kyrie's, and hopefully that works. But the Celtics youngsters learned a few lessons from last season also. Expect more compatibility this year, and hopefully, more wins. This will be a fresh start for all of the Guys in Green.