By Tom Lane October 02, 2019
This is the type of story I love to write. According to MassLive's Tom Westerholm, second-year center, Rob Williams, indicated he got a text from Al Horford after Al's departure from the Celtics this summer. Horford's text broached positive things for Rob this coming season:

Al Horford texted Robert Williams when he left the Celtics this summer, telling him he expects the second-year big man to blossom.

The gesture meant a lot to Williams.

"It was kind of like a respect thing. It made me feel good.”https://t.co/w7mi3kOVnb pic.twitter.com/d2LQ1loYrt

"Never mistake courtesy for weakness" and "Never mistake silence for apathy" are two of my treasured personal sayings, and the latter applies to Horford (actually, maybe both do). I remember vividly the times when Marcus Smart would blunder on the court - get taken out - and quietly listen to Al's counsel on the bench. 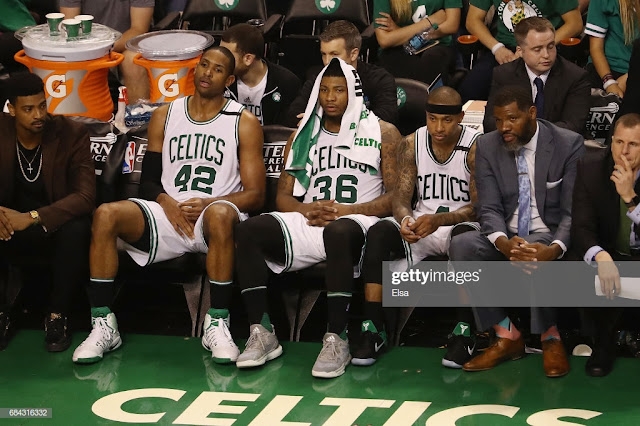 Apparently, Al did the same for R-Will and other young Celtics players. Rob has all the physical tools - height, length, wingspan, athleticism and magnificent timing on his blocks. Horford's advice to Williams last season, and his encouragement to the youngster, may be just what Rob needed to harness those in-born gifts, work on his game, and take on a significant role this season (per MassLive's Tom Westerholm):

“He was a great leader, a non-vocal leader,” Williams said. “In some cases, you’ve got to follow people that aren’t vocal in everything they do. But off the court too, Al comes up to me all the time. ... Al was a great leader.”

I will miss Al Horford's presence on the parquet - and his positive influence on and off of it. But that influence remains despite Al leaving for a stint with the rival 76'ers. Marcus most likely can credit some of his growth as a player and individual to Horford's counsel and quiet leadership. And hopefully, we will see Rob Williams blossom into a solid NBA center/power forward, where his performance on the court and elsewhere give us subtle reminders of Al's influence on this super-athletic youngster.