Amid cries for him to go, Semi Ojeleye shows improvement in Celtics win over the Magic

By Tom Lane October 12, 2019
Semi Ojeleye never seems to get much ink in the writing about the Celtics and the prospects for this season. Entering his third NBA season, Semi has shown a lot on the defensive end but little on offense. I have previously written that he needs to rebound and hit his shots at a higher rate. He did fairly well at both when Boston took down Orlando 100-75. 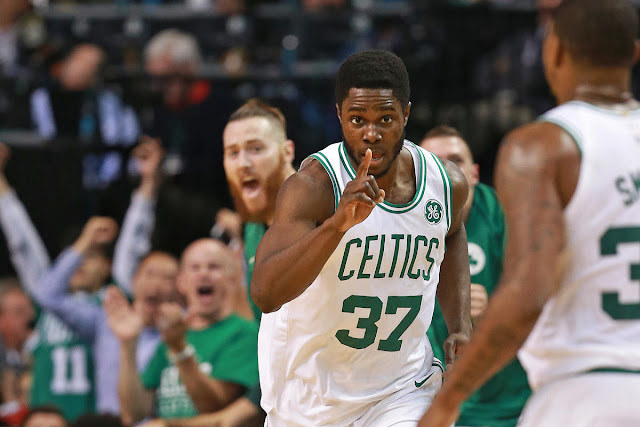 In only 12 minutes of floor time, Ojeleye scored five points on 2-of-4 from the field and 1-of-2 on 3-pointers - all while taking down four rebounds. While these are not startling numbers, four boards in 12 minutes means he has worked on that part of his game. And he took four shots, one a 3-pointer, and made half of them. He was drafted by Danny Ainge as a potential 3-and-D guy, but the rebounding and offensive output have been lacking. No one ever bad-mouthed his in-your-shirt defense. He has had that since he walked into TD Garden.

Man...Celtics fans have really turned on Semi Ojeleye. A year ago at this time he was the 'Giannis Stopper". Now? Cut him to keep undrafted rookies because he stinks.

I'm consistently reminded how much we love what is shiny and new.

I must admit to being euphoric about last night's game, but I never get too high or too low on anything. One game is too small a sample to project Semi into stardom, but I was happy to see what he did versus the Magic. Hopefully, it was not a fluke. Semi's defense and versatility are too valuable to quickly discard, and we are seeing a lot of Celtics fans pushing for one of the newer guys to replace him on the roster. Too early for that. If we see more rebounding and shooting production from him, he needs to stick in Boston.