By Tom Lane October 28, 2019
Celtics boss, Danny Ainge, has on occasion been labeled as somewhat heartless. Even his buddy, Kevin McHale, called him "one cold-blooded character". Trading stars Antoine Walker, Paul Pierce, Kevin Garnett and Isaiah Thomas may have brought some of that thinking about. And he did let Leon Powe (pronounced POE) walk away in free agency after Leon suffered a severe ACL tear. But there is more to the tale.

Think Celtics boss, Danny Ainge is heartless? Read about what he has done for Leon Powe in my upcoming article. Here's his performance in the 2008 Championship series versus the Lakers.

Leon was the 49th overall pick in the 2006 NBA draft by Boston. He was primarily a back-up, but he exploded for 21 points in 15 minutes in Game 2 of the 2008 NBA Finals. Lakers coach Phil Jackson was so upset at losing that game, he went out of his way to mispronounce Powe's name - calling him POW. The Celtics went on to win the series versus Los Angeles and take the 2008 Championship. 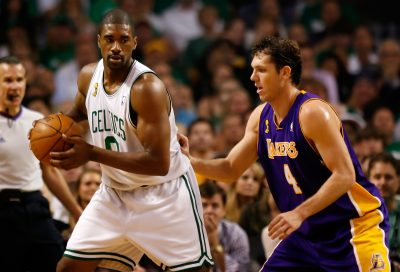 The next post-season Leon suffered a severe knee injury which was later diagnosed as a torn ACL. Danny let him walk away in free agency, and Leon signed for the vet minimum with the Cleveland Cavaliers - but his best days were behind him. He left the NBA in 2011, but he got a call from the Boston Celtics in 2014 about a position with the team. He took the position in the front office and is still there today - acting as Community Ambassador for the Green.

I love Leon Powe and I love this story. His childhood was spent in severe hardship, but he managed to emerge as a solid NBA player and fine individual. Ainge runs the Boston Celtics - a big-time business. And he has made some very-tough decisions along the line that appear to be "cold-blooded". But there is another side to him. The Leon Powe story reveals it.