Gordon Hayward's smile after his steal-and-score means he's back

By Tom Lane October 08, 2019
Gordon Hayward's line in the Celtics 107-106 victory over the Charlotte Hornets was not exactly euphoria-producing. In 22 minutes, he put up nine points on 4-of-10 from the field and 1-of-4 on treys. He did add three rebounds, three assists and a steal. But the steal , full-court drive and layup told the story - as did his wide smile following the play. Look for it in the video below.

Too bad @gordonhayward got injured (hopefully it's a minor injury), because he was ROLLING during the first half of last night's game against Hornets.

He got his bounce back again! Highlights: pic.twitter.com/SMSvxJZLie

His production was Gordon-like - diverse as always. Points, rebounds, assists, steals. The normal stuff. But what was noteworthy was that he attacked the paint - took contact - and did so without hesitation or apparent fear. 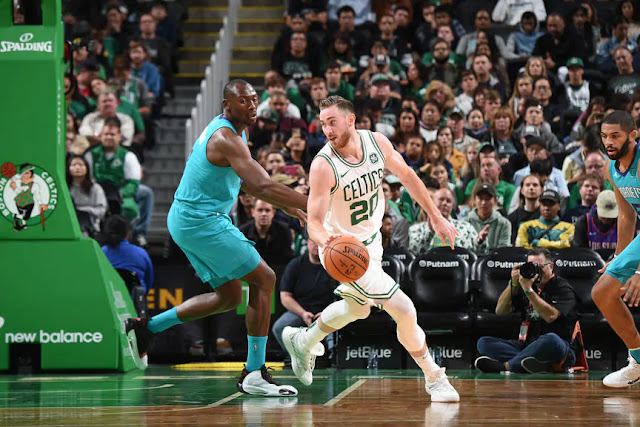 Hayward is never the biggest or most-athletic guy on the court, but he often seems to be the most clever and most versatile. Many NBA players, if their shot isn't falling, lose their value quickly. Not so guys like Gordon. If the ball isn't finding the net, he goes to the boards or to his passing game. It is great to see him back with that bounce we remember from his Utah days. And his smile following the steal and score was heart-warming.