Let me come right out of the gates with this: I am biased. I am a huge Green Teamer who always looks for the positive when it comes to the Celtics. So when I spoke this gem to my brother two months ago, he was pre-conditioned to try to temper my enthusiasm just a bit.

1. Virginia was the eventual NCAA championship and they were by all measures one of the top 2 defensive teams in the country. They gave up 56, 51, and 49 points to the TEAMS in the preceding games of the tournament before they ran into Carsen Edwards who lit them up for 42 in the elite 8.

2. Carsen hit 10 threes in the game. Not one was easy. The most open he got was on a shot he hit from 10 feet behind the 3 point line after a big had switched onto him. 3 of his threes were quick catch and shoots after he raced off of a pick and received a pass. The other 7 were all off the dribble, either 100% creating for himself or a step back from a pick and roll situation. The guy drains consistently with hands in his face!

3. Carsen also went for 42 points in the second round against Villanova. For the tournament he had a record breaking 28 three pointers altogether (and he only played 4 games)!

4. He averaged 24 points a game for the season last year, while being the only player on his team who could legitimately create his own offense. 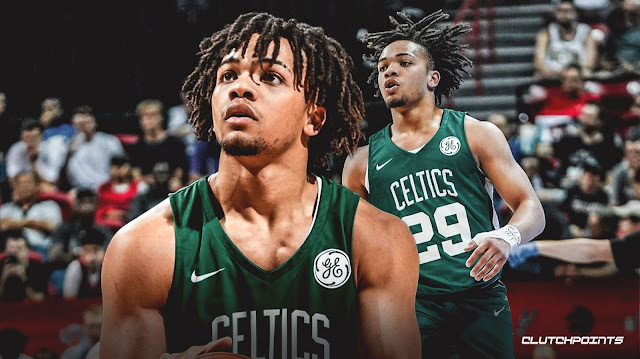 How @Cboogie_3 lasted into the 2nd round of the draft is still a complete mystery to me. If the Celtics had selected him with the 14th pick in the first round (which we used on Langford), people would all be talking right now about what an incredible pick it was, and how the Celtics went against all of the “mock draft expert projections”. The dude legitimately should have gone in the lottery. No debate allowed, not from my brother or anybody else.

Carsen Edwards checks in the game and immediately hits a 3...

Carsen Edwards from 3 is going to give new meaning to the word automatic.