By Tom Lane October 08, 2019
With the exception of Jayson Tatum, Brad Stevens is not known for giving rookies significant time on the floor. But second-round pick (33rd overall), Carsen Edwards, may be the next exception. At 5'11" and 200 pounds, he is hardly the prototypical Celtics shooting guard, but playing alongside point guard, Marcus Smart, this could work.

The video shows Smart's hustle down court on defense, but Edwards is also right there. Carsen is in constant motion, on both offense and defense. With some seasoning, his strength and determination could transform him into a solid 2-way player. 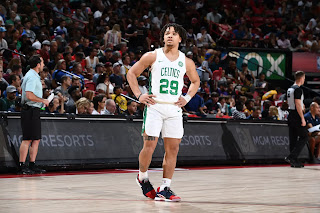 I have written previously about Edwards possibly becoming the next Green Running Machine in the mold of the late John Havlicek. On offense, Carsen will simply wear down defenders much like "Jarrin" John, and he always seems to get a decent shot off with a quick release and the ability to create space. There is no reason why he can't become a disruptive defender at the NBA level.

Make no mistake - this youngster can score in bunches. He poured in 42 points on March 23, 2019 in Purdue's NCAA Tournament win over Villanova. In Summer League, Carsen averaged 19.4 points per game on 48% from the field. He also averaged 3.8 rebounds and 1.0 steals per game. Despite his lack of size, he gets his share of boards. 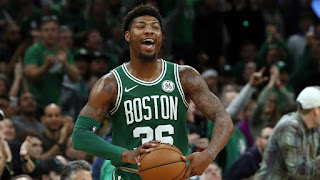 We all know that Smart plays bigger than his height, which is 6'3" without shoes. The 6'3"-5'11" duo of Smart and Edwards is taller version of the 6'1"-5'8" (without shoes) 2016-17 back court of Avery Bradley and Isaiah Thomas. That team over-achieved, going all the way to the Eastern Conference Finals, losing eventually to the Cleveland Cavaliers.

Bradley was the defensive whiz on that unit, and Isaiah was putting up shots from everywhere on the court. He was virtually unstoppable. Lack of size may be a detriment on defense, but it can be a positive attribute on offense if employed correctly. IT did just that and drove opponents nuts. Edwards has that same capability. I look forward to seeing Marcus and Carsen working the back court together.