Kyrie Irving playing his heart out for the Nets, but the rumblings have started

By Tom Lane October 29, 2019
If you are thinking my piece on Kyrie Irving and the Nets is a total Kyrie-bashing, read elsewhere. As I have previously written, I am a bit like him, and the blame for the Celtics disappointing 2018-19 season is shared by many within the organization. Any player that leaves the Boston Celtics of their own volition will be scourged by fans for decades. But the rumblings surrounding Irving in Brookline have already started according to ESPN's Jackie MacMullan, and frankly, I am not surprised. It all started this past summer (per Jackie Mac):

THE NETS WERE delighted when their new power trio (Irving, Kevin Durant, DeAndre Jordan) organized summer workouts for the team at a Los Angeles middle school in July and August. The aim was to develop chemistry and learn each other's tendencies on the court. It was going swimmingly until Brooklyn dispatched its performance team to Santa Monica for an annual two-day minicamp with the players, which involved, among other things, gathering biometric data through wearables. Irving, who has spent the past nine years working with his own performance specialist, Robin Pound, balked.

When the Nets gently urged him to participate, he didn't mince words: "I'm not doing it." 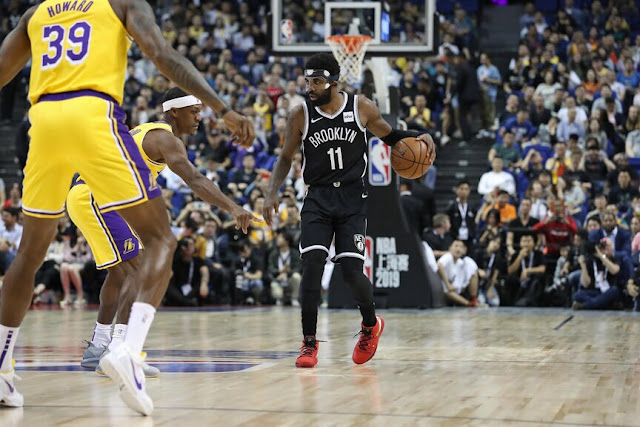 When a player performs at Kyrie's sky-high level, accolades have to be given to his training crew, and it may be understandable why he refused to participate in the 2-week stint with the Nets performance team. Still, he was with a new team, and it may have been in everybody's best interests for him to give it a shot. But it didn't end there. Irving going into funks and shutting down seems to be a concern (Per Jackie):

Yet Irving's infamous mood swings, confirmed by his ex-teammates, which followed him from Cleveland to Boston to Brooklyn, are the unspoken concern that makes Nets officials queasy. When Irving lapses into these funks, he often shuts down, unwilling to communicate with the coaching staff, front office and sometimes, even his teammates. Nets team sources say one such episode occurred during Brooklyn's trip to China, leaving everyone scratching their heads as to what precipitated it. There's hope that Durant will be able to coax his friend into a better frame of mind. But when presented with that scenario, KD says he will be hands off.

"I look at Kyrie as somebody who is an artist," Durant says. "You have to leave him alone. You know what he'll bring to the table every night because he cares so much about the game.

As MacMullan put it, "There has already been leeway to allow Irving to march to his own drum", but I doubt the leash will get very long. No team can let a player be the main focus, as opposed to the team, coaches and front office - although that seems to happen in today's NBA.

“If a man loses pace with his companions, perhaps it is because he hears a different drummer. Let him step to the music which he hears, however measured, or far away.” --- Henry David Thoreau

So it appears that Kyrie is once again marching to his own drumbeat, which many around him don't hear - or even wish to. Here are his stats after three games this season:

Fantastic stats, but the Nets are 1-2 and sit in the 8th position in the Eastern Conference. Irving is an absolute superstar - a unique player that doesn't seem to think like the rest of humanity. Still, little of value is accomplished without innovative thought and action. Kyrie once again has the innovative thinking, refusing to join the herd and causing disruption within the Nets fold. His drumbeat is the same as with Boston - and he may be losing pace with another team. The greener pastures may have lost some of their luster.