By Tom Lane October 23, 2019
The Celtics versus the 76'ers is not simply a battle between two Eastern Conference rivals. It is a contest between two vastly-different organizational strategies - namely Danny Ainge's no-punt, never-tank policy against Philly's shameless, multi-year "Process".

"The Process" is well into its sixth year in Philadelphia - and counting, having started in 2013 with the 76'ers trade of All-Star, Jrue Holiday, in a deal that brought in Nerlens Noel and Michael Carter-Williams, neither of which are still with the team. Future moves led to the acquisition of Joel Embiid, Jahlil Okafor, Ben Simmons and Markelle Fultz - all occurring while the 76'ers were piling up losses at a record clip. Okafor and Fultz are also no longer in Philadelphia. 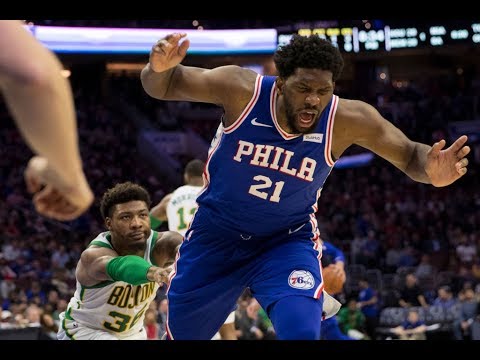 Ainge, in contrast, never punts. He rebuilds on the fly - always wanting to remain in serious contention. One criticism Danny had of his mentor, Red Auerbach, was that Red retained his star players after they had started to fade - using The Big-3 of Larry Bird, Kevin McHale and Robert Parish as prime examples. Ainge's trade of Kevin Garnett and Paul Pierce to the Nets was a vivid sign that Danny was not going to mimic Red's propensity for keeping players well-beyond their prime.

So tonight's battle between Boston and Philly comes down to shameless-tanking of "The Process" versus the "contention-always" policy of Danny Ainge. The 76'ers have Embiid and Simmons to show for their tanking marathon, while the Celtics have the Jay Team of Jaylen Brown and Jayson Tatum on the roster via the Celtics/Nets trade.

Philadelphia is ranked higher than Boston in most projections of the Eastern Conference race. Both teams were bounced in the second round of last season's playoffs. Former Celtic, Al Horford, has added his size and skills to an already-big Philly starting five. No one quite knows what to make of the Philly mix of players. After six-and-a-half years of "The Process" - and with what many call the most-talented roster in the NBA - the 76'ers still have not vaulted into serious contention for a Championship.

So tonight, it's the 76'ers versus Celtics. Elton Brand against Danny Ainge. Tanking as opposed to never-punting. Both teams are poised for a serious playoff run. Just a great start to a new season.

Oh, --- one more potential battle - Joel Embiid pitted against Marcus Smart. We hope Marcus has adopted a "No Shove" policy with respect to Embiid. As Brad Stevens has stated, Smart needs to be in the game and not tossed for an emotional outburst. Make no mistake, the Celtics-76'ers rivalry is back.