By Tom Lane October 16, 2019
Lost in the euphoria surrounding the 30-point scoring explosion of Carsen Edwards in last night's 118-95 win over Cleveland was the play and production of fellow-rookie, Tremont Waters. Waters came away with a team-second-best 24 points (to Carsen's 30 points) on 10-of-16 from the field and 3-of-8 on 3-pointers. Tremont passed off for a team-high seven assists, plus adding two rebounds and two steals. 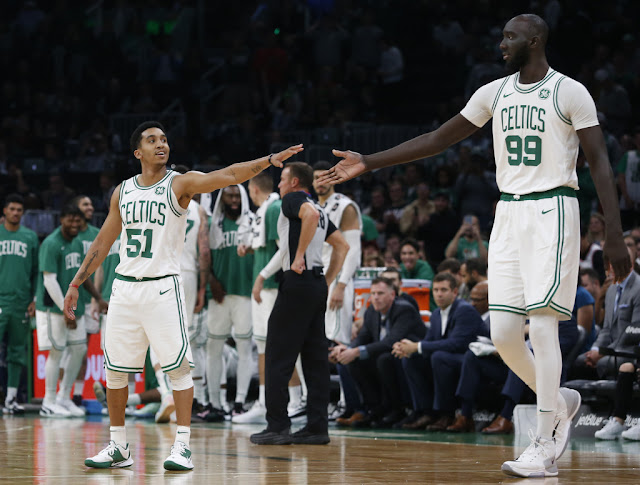 Brad Stevens has stated that all of the newcomers on the Celtics team can play - and he means it. The only negative part of that is trying to figure out who sticks on the full-time roster and who doesn't. The Max Strus versus Javonte Green debate continues, and it may just come down to what special need has to be filled.

But Waters cannot be ignored in the discussion about the final 15-man roster. Much like former-Celtic, Isaiah Thomas, Waters knows just how to use his lack of size to ignite his offense. He has NBA-level skills and a solid basketball IQ (per MassLive's John Karalis):

Waters was also extremely impressive in this game, showing off what’s becoming a trademark shiftiness that opens up driving and passing lanes. In fact, Waters shot just as well as Edwards overall by effectively getting past Cavs defenders (which, admittedly, isn’t the hardest thing to do) and finishing at the rim. Waters finished with 24 points and 7 assists.

“You look at a guy that size and you try to figure out how he does it," Stevens said. "And he just keeps doing it.”

Karalis' portrayal of Tremont as "shifty" hits the mark. That gives the connotation of deceitful or evasive. That's about right. He fools his defenders - lulls them into complacency - and then attacks the rim.

Water's stats after four pre-season contests show: 16.3 MPG, 10.5 PPG, 1.5 RPG, 4.0 APG, 1.5 SPG, 54% (FG), 31% (3s). His evasiveness and trickery are getting results. Also noteworthy is the fact that Tremont is ranked 6th in Player Impact Estimate in the NBA for players with 4-games-played in pre-season. By the way, Javonte Green comes in ranked 4th in that category.

I mean, Tremont Waters can ball. I am a big fan. pic.twitter.com/ZeJcI59MBA

I predict in at least one game this season, we will see a Carsen Edwards/Tremont Waters back-court, at least for a limited experiment. Some may argue that the 5'11'-5'10" (without shoes) duo is too damn short I will counter that with the thought that the 6'1"-5'8" (without shoes) pair of Avery Bradley and Isaiah Thomas comes in at the same average height of 5'10.5", and they proved to be quite effective.

Who knows where Danny Ainge and Brad Stevens go from here figuring out who gets into the full-time roster, but Waters needs to be taken seriously. The kid is an NBA player.