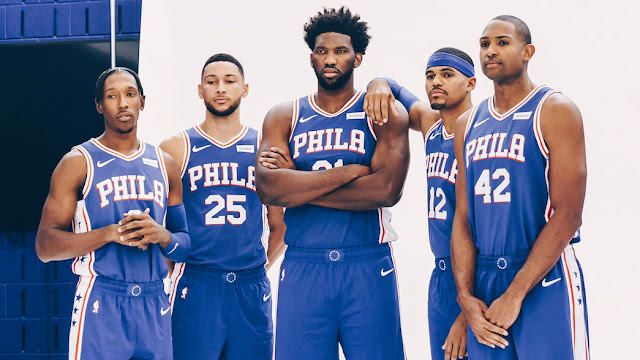 When you look at the current Philadelphia 76'ers team on paper, it appears that they can take on any team in the League and come out victorious - on paper. But the game is played on the hardwood, and the question here is, what chance to the Boston Celtics have of defeating Philly in a 7-game series and coming out of the East in the post-season.

The 76'ers lost Jimmy Butler but picked up Josh Richardson and former Celtic, Al Horford. They are big and talented. Their backcourt of the 6'10" Simmons and 6'6" Richardson will be a handful for many teams. And if rumors of Simmons finally developing an outside shot over the summer are correct, he could be a nightmare for defenders.

On this morning's NBA TV broadcast, 7-foot 76'ers center Joel Embiid stated that over the summer he lost 25 pounds of body weight, while gaining five pounds of muscle - which isn't good news for his defenders. He is joined in the front court by 6'10" center/forward Al Horford who brings his all-around skills to an already-strong unit. The 6'9" Tobias Harris rounds out the front court trio.

The Celtics can not match Philly on length. Well, they actually can do that with a big lineup consisting of 6'11" bigs Enes Kanter and Vincent Poirier - or possibly 6'10" sophomore Rob Williams and 6'8" Daniel Theis. But that combination gives up too much in talent to be effective.

Stopping the 76'ers point guard, Ben Simmons, may be the key here. Although I still favor Jaylen Brown as the starting shooting guard for Boston, Marcus Smart as starter at that position makes more sense versus Philadelphia. Marcus has repeatedly shown his effectiveness as a defender against opposing bigs of any description - and I believe that would include Ben.

Jayson Tatum would most likely get the nod at guarding Horford - no easy task. Gordon Hayward taking on Harris at the 3-spot - Kemba Walker versus Richardson in the back court - and Enes Kanter taking on Embiid at center rounds out the projected lineups.

There is little talk among Celtics players about expectations this season, and that is refreshing. The team comes in loose and ready to play as a unit. And it is time for Brad Stevens to step away from his sometimes-rigid substitution patterns and experiment. Since the Celtics can't put out a big-man lineup with sufficient talent, an occasional extreme-small-ball lineup might work.

Throw in 6'7" Semi Ojeleye to guard Embiid with Smart on Simmons. Then round out the quintet with Kemba and the Jay Team of Jaylen and Jayson. Hey, there is little pressure on the Guys in Green this season. In most rankings they are placed third in the Eastern Conference behind Milwaukee and Philadelphia. Most analysts give Boston little chance of seriously contending for a Title. It is time for Brad Stevens to be more flexible and inventive. There is little to lose.