Why Danny Ainge retained Javonte Green instead of Max Strus

By Tom Lane October 20, 2019
With dead-eye, 3-point shooter, Max Strus, being waived by the Celtics yesterday, all indications are that Javonte Green will be the guy to fill that 15th roster spot. It had to be a close call for Danny Ainge. With Boston's depth, they couldn't keep both. So why did Danny let Strus go while retaining Green?

The above video may reveal the reason. My thinking is that Ainge allowed defensive ace, Tony Allen, to leave the Celtics in free agency prior to the 2010-11 season, and openly regretted the decision. With the Memphis Grizzlies, Tony earned his very-first NBA All-Defensive Second Team award in his first season in Memphis - and went on to be a 3-Time All-Defense First Teamer and 3-time All-Defense Second Teamer - all with Memphis (per NBC Sports' A. Sherrod Blakely):

When Danny Ainge makes a personnel decision, it's rare that even with hindsight, he looks back on it with regret.

But the decision to not pursue re-signing Tony Allen with more vigor last summer was one that Ainge admits he wouldn't mind a do-over on, if possible.

The perception has been that the Celtics didn't step up financially to bring Allen back.

"We offered Tony the same deal he ended up getting in Memphis," Ainge, Boston's president of basketball operations, said on Friday.

However, that offer did not come until after the Grizzlies' offer.

Allen felt overshadowed by Ray Allen and Paul Pierce in Boston, and he thought he was under-appreciated. Tony was never a superstar in the League, but he ended up being one of the premier defenders in the NBA. Danny may see similarities in Javonte Green - thus the decision to retain him over Max Strus. 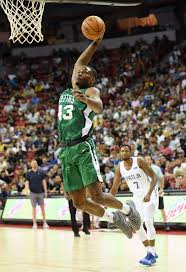 Allen was the 25th pick in the 2004 NBA draft, while Green went undrafted in 2015 - received little interest from NBA teams - and spent a number of seasons overseas. At the age of 26, he is acquiring interest from a number of NBA teams, and Danny doesn't wish to make the same mistake twice. This is not to say that Green will reach Allen's heights as a superior NBA defender, but he has the size (6'4" without shoes) and athleticism to reach that level.

In four preseason games, Javonte hit 16-of-20 field goals (80%) while bringing down a total of 16 rebounds. It is only preseason play - and a small sample - but if Green can add significant offensive production to his already-obvious defensive ability, he may have a bigger role down the line than a little-used, end-of-the-bench guy.