By Tom Lane November 27, 2019
To be honest, this off-season I mentally placed Celtics center, Daniel Theis, on the back burner. He didn't have a particularly good season in 2018-19 - Rob Williams was going into his sophomore season, and Enes Kanter was on his way to Boston. But Danny Ainge obviously wanted Daniel in the fold, particularly with the departure of Al Horford to Philadelphia. Ainge signed Theis to a 2-year/$10 million deal - with the second year non-guaranteed. 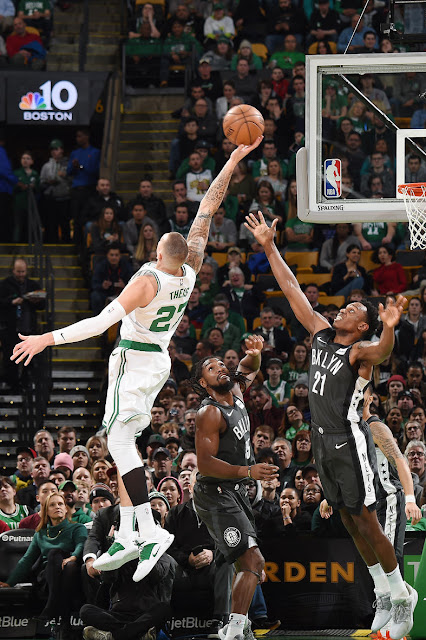 With Kanter missing a number of games with an injury, Daniel has started most games for the Celtics and is averaging career-highs in minutes (22.7), points (6.5), rebounds (7.4), assists (1.3), steals (0.6) and blocks (1.6). In his rookie 2017-18 season, Theis seemed to improve his game every month. He took a slight hit in minutes last season, as did his game - but recovery from meniscus surgery and the year-long disruptions surrounding the team may have played a role.

I applauded his rebounding skills in his first season, and he is even better on the boards this year (7.4 RPG). And his shot-blocking is markedly better (1.6 BPG), as are his assists (1.3 APG). He may never achieve the talent level of the Warriors' Draymond Green, who averaged 10.8 PPG, 10.6 RPG, 8.1 APG, 2.0 SPG and 1.5 BPG in the 2018 Championship playoffs, but significant improvement over the course of the season could earn him 28-30 MPG this post season.

Just watching some of those Hield 3's... The Celtics really missed Daniel Theis in this one. He can actually switch out on some of these plays and challenge the shot. All SAC needed to do is set good picks @ good angles as Brad said postgame & he got tons of clean looks pic.twitter.com/Y5vPbpxfHu

Boston already has a go-to scorer in Kemba Walker. With the added defensive pressure seen at playoff time, a clutch player that can handle the ball under pressure and always get a decent shot off is vital. Kemba can do that. And it is starting to look like Jayson Tatum has that ability also. Both Marcus Smart and Gordon Hayward have the savvy, skills and experience to handle the point when called upon.

Wings? Yes, Boston has plenty of those. And they play sound defense, rebound and score. The center spot - still in doubt. Center-by-committee didn't work for the Celtics in the 1969-70 post-Russell/pre-Cowens season, when Jim Barnes, Hank Finkel and Rich Johnson shared the center duties, and it may not this year with Daniel Theis, Enes Kanter and Rob Williams covering the 5-spot. None of the trio can hit from distance, and Theis seems to be the only one adept at defending the perimeter. Put all of their skills into one player, and you have what Boston needs for the post season. Rob can protect the rim, rebound and finish lobs - and his passing is under-rated. Kanter scores inside and rebounds. Theis needs work on getting the ball to his teammates and hitting his 3-pointers, but the rest is there.

Daniel's issue with 3-pointers may lie in his unwillingness to take more attempts. Is his 2012-13 EuroLeague season, he took only eight 3-point attempts, making only one. In the following four seasons, he was 51-of-132 on treys, a success rate of 38.6%. He may need to become more of a threat from beyond the arc by launching more shots from there. He has never been a high-assist guy, and probably never will be.

There aren't a lot of Draymond Greens out there, but wouldn't he be a great addition to the Celtics playoff roster? If the right player is out there on a good deal, Danny Ainge will look into it. Barring that action, there is still a chance that second-year man, Rob Williams, could leapfrog Theis as starting center. Rob's per-36-minutes stats (10.8 PPG, 11.5 RPG, 3.5 APG, 2.3 SPG, 3.0 BPG, 1.9 TOPG) are revealing, but he may not be ready to take on a big-minutes post-season role. So Brad Stevens may roll the dice on Theis come the playoffs. Stay tuned.