By Tom Lane November 06, 2019
Gordon Hayward really doesn't want to talk about his 2017 ankle injury any more - he just wants to play. And he certainly did last night when the Celtics took down the Cavaliers, 119-113. He racked up a team-high 39 points while hitting ALL 16 of his 2-point attempts. Oh, and he added seven rebounds and eight assists (per NBA's Steve Herrick):

Cavaliers forward Larry Nance Jr. had a simple assessment of the performance.

"Crafty", indeed! I have written this frequently about the versatile Hayward. He is as clever a player as we see on the hardwood. Much like Paul Pierce, he works the ball on offense, always looking for the right play, whether it be a drive, jumper or pass. "Cerebral" defines his play.

Here's the entire list of NBA players who have made at least 15 2-pointers in a game without a miss:
∙ Wilt Chamberlain (3X)
∙ @GordonHayward

But Gordon did have some help from his teammates. Kemba Walker kept up his solid play with 25 points, eight rebounds, three assists, one steal and two blocks. Jayson Tatum finished with 18 points and seven rebounds. Daniel Theis started at center - grabbed a team-high nine boards and blocked five shots. 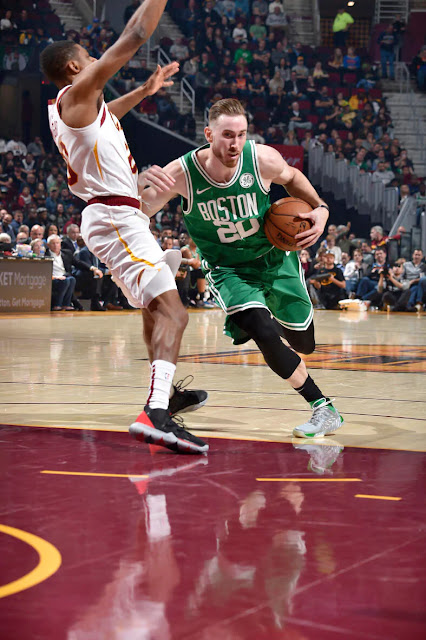 Rob Williams came off the bench to hit 3-of-4 from the field for six points. He also managed to take down four rebounds, hand out three assists and block two shots. Carsen Edwards played 14 minutes, scoring 13 points on 5-of-6 from the field and 3-of-4 on 3-pointers.

Colin Sexton was high scorer for the Cavs with 21 points. Tristan Thompson had a triple-double of 19 points and 13 rebounds. Both Enes Kanter and Jaylen Brown sat out the game - Brown with illness and Kanter with a nagging injury.

The Celtics are now tied with Philadelphia for best record in the Eastern Conference, with both teams at 5-1. Boston travels to Charlotte to take on the Hornets on Thursday. The Celts have now won five games in a row and will look to make it six.