Following Kemba Walker's cringe-worthy injury last night, thankfully followed by news that the damage may not be as serious as previously thought, I seriously need to let Celtics fans know how much their response has meant to me and my family. The cards and gifts just keep coming. One such gift almost literally placed my great nephew, Carson Thomas Lane, squarely on the TD Garden parquet.

The hand-made 3-dimensional card sent by Kathy and Dick Greene of Plainville, MA is a masterpiece of workmanship. It wasn't created in mere minutes. Like so many items we have received, much thought and effort went into it. 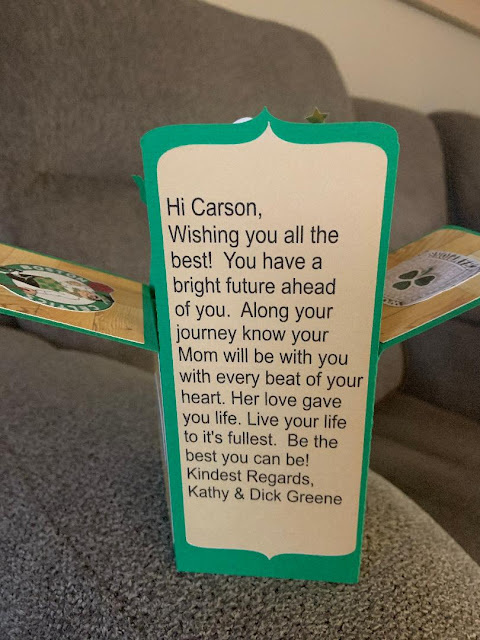 This unique item displays Carson immersed on the parquet floor, in front of the Championship banners and trophy and accompanied by a Championship ring and Celtics logo. It is all there. As I write this, my family is planning Carson's first trip ever to TD Garden, hopefully on December 6. A glitch has surfaced in that plan, but we are determined to give him that adventure. I promised Courtney that I would make sure Carson has a happy life. Thanks to all of you for the love and support. You are helping me fulfill my promise to Courtney. I'm so grateful. Maybe one day Carson will be standing on the parquet for real but he'll be wearing a Celtics uniform. Stay tuned!


Note from Tom Lane: People need to know that my daughter, Lisa, had been Courtney's true champion from her birth to her death 25 years later - with her through the best - and the worst. She is now the legal guardian of Courtney's son, Carson Thomas Lane. They say "it takes a village", and we are honored to have all of you be part of it.