By Tom Lane November 28, 2019
Shortly after Kyrie Irving came to Boston, I supported his "Flat Earth Theory" as his way of playing with our minds. I saw nothing negative in it. When he changed his mind and left the Celtics this off-season, I chose not to rebuke him for his move or for his aloofness towards the end of last season. But I have to admit that his latest rant on Instagram is just plain drivel. There is no substance to what he wrote. It means nothing. 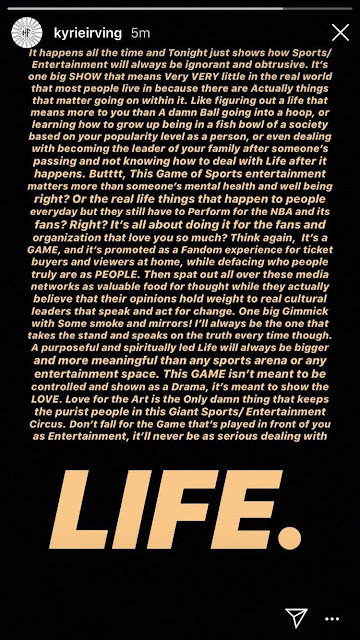 I also think that the "COWARD" posters surrounding TD Garden last night went too far. But so did Kyrie with his Instagram post. He calls sports and entertainment "obtrusive", which infers that they are intrusive. Hell, I want basketball to be intrusive in my life. It has been a large part of my existence, both as a player and observer.

Irving's rant is all about himself - and no one else. This game that he indicates merely involves "a damn ball going into a hoop" has given him a lot of money and fame. And it has given me and many others a release from what he calls the real world, which is actually what it is supposed to do - distract us for a couple of hours from the often-pitiful state of our society.

I honestly believe that Kyrie didn't play last night in Boston because he has a legitimate injury. But the anti-reception he received from the Bean-town fans, even though he wasn't there, must have done a number on his psyche. Even his buddy, Kevin Durant, thinks Kyrie is obsessed with the flak from Celtics fans. They didn't leave. He did. Get over it.

Irving alludes to the death of his grand father as being a large reason for his aloofness last season. Realizing we all respond differently to tragedy, I note that the death of Marcus Smart's mom, Camellia, had no obvious adverse affect on his behavior. I didn't cover the entire rant because much of it lacks true substance. Much of it is drivel. He should have stuck with his "flat earth" stuff. It had more meaning. But we can only hope that his written vent helps him. But he needs to focus on having that "damn ball going into a hoop." I still love watching him perform. The game of basketball is pure entertainment for me, and a damn fine distraction from the most-recent tragedy in my life. Doesn't get any more real than that!