By Tom Lane November 29, 2019
This move may be lost in the archives, but yes, in 1989 Red Auerbach traded Danny Ainge to the Sacramento Kings. Danny was in his prime at the time, and Bill Russell was the General Manager of the Kings. Larry Bird and Kevin McHale were nursing injuries and not getting any younger. Big men, Joe Kleine and Ed Pinckney came to Boston in the trade in an attempt to shore up the center and power forward spots. 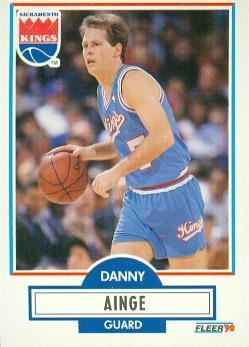 This is ironic since Ainge later criticized Red for keeping players on the roster well past their prime. But it was Ainge in his prime that Auerbach sent packing.

Danny got a small bit of revenge on Red in Sacramento on December 27, 1989. Ainge poured in 39 points against his former team - grabbed six rebounds - and handed out nine assists. But the Kings lost in overtime, 115-112, with Bird coming close to matching Danny's scoring with 37 points. The King's loss was the only glitch in Danny's revenge, and you can bet that he cherished every shot that hit its mark.

Until November 27, 2019, Ainge was only one-of-three players to notch 39-or-more points in the player's first return against his former team. Most recently, the Lakers Anthony Davis broke that record, scoring 41 points against the Pelicans in his first match-up against his former team. Here are some thoughts from Danny on his return versus the Celtics (per BostonGlobe.com's Gary Washburn):

“The general manager that traded for me was Bill Russell, which was ironic,” Ainge said. “I enjoyed my time in Sacramento. I felt like we were an up-and-coming team. I felt like the Celtics team was on its way down. Larry was in two casts with double Achilles’ tendon surgery. Kevin had the broken foot, and D.J. and Robert were aging a little bit. It turned out to be the best thing for me. I had a fun one year in Sacramento, but it was disappointing with all the injuries we had.

Lots of irony here. Trading Danny in his prime was very un-Red-like, and sending him to Bill Russell's Kings? After taking over the reins as Celtics GM, Ainge was not going to make what he felt was an error by Auerbach and keep stars well-past their primes - as evidenced by him sending Paul Pierce and Kevin Garnett to the Nets in trade.

There are now only four players to score 39-or-more points in their first return against their former team - Ainge, Stephon Marbury, Kevin Durant and now, Anthony Davis. Pretty good company. I always felt that Red trading Danny for Kleine and Pinckney was a bad idea. Ainge acquired two Championship rings with Boston, But he was always overshadowed by Bird, McHale, Parish and DJ. He was the fifth-best player on that Celtics team, but he really stands out as Auerbach's replacement at the helm of the same franchise. His current crop of players is quite young, so don't envision any major trades for 10 years or so.