Send a guest article. Disagree with my Jaylen-to-the-bench stance

By Tom Lane November 07, 2019
Send me your guest article disagreeing with my Jaylen-Brown-to-the-bench argument. I feel my stance on Marcus Smart retaining his starting role with the Celtics is a sound one. My colleague at @CelticsSentinel, Jim McIntyre is a huge fan of Marcus Smart but wants Jaylen Brown to re-enter the starting unit upon his return to action. There is no right or wrong answer here. Give me your opinion.

Me and you not on the same page with this one Tom. :) I think Jaylen gotta be right back in with the starting 5. He came off the bench some last year and I thought he was horrible in that role. Marcus does it and does it well.
— Jimmy in NH (@JimmyMac257) November 7, 2019

It was a year ago that I wrote that Marcus should replace Brown in the starting-5. That happened on November 26, 2018 with the team holding a 10-10 record. With Marcus at shooting guard next to Kyrie Irving, the Celtics went on an 8-game winning streak which ended on December 15, 2019. In the first 20 games of the season, the Guys in Green had been lethargic at the beginning of contests, and Smart quickly cured that lethargy. He proved to be instant energy right out of the gate. Smart needs to start games and be assigned to the opposition's star player. 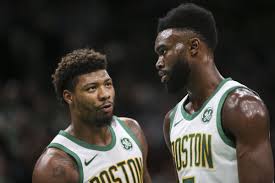 Smart is a better, and more versatile defender, than Jaylen

Smart is three inches shorter than Brown, but he is stronger and a better defender. He takes on the likes of 6'11" Giannis Antetokounmpo and 6'9" Kevin Love, as well as star guards like James Harden. He can literally guard anyone. Brown is a very good defender, but he is no Marcus Smart.


Jaylen's offense is needed on the second unit

With scoring from Kemba Walker, Jayson Tatum and Gordon Hayward, Brown's offense is better-used as a sub. Scoring has been hard to find on the second string, and Jaylen would help with that. Marcus usually gets assigned to the opposition's star player, and that means he needs to start.


Danny Ainge needs to see what he has in Jaylen

Brown got his contract extension, but Ainge still doesn't know what his ceiling really is. That is best accomplished as a substitute where he is not surrounded by former (Kemba Walker and Gordon Hayward) and future (Jayson Tatum) All-Stars. Just how good is Jaylen? We will find out.


Send me your guest article with your Jaylen-needs-to-start argument. Get it to me at lanetomlin@aol.com, via Twitter (@CelticsSentinel) or to the comment section of this article.

Who should get the starting nod long-term - Marcus Smart or Jaylen Brown?https://t.co/fbuNjKdjPF