Sending the 7'5" rookie, Tacko Fall, to the G League has Boston Celtics fans eager for his Celtics return. He has signed a two-way contract with the Boston Celtics and the Maine Red Claws allowing him to spend up to 45 days with the Celtics. This means most of his days will be spent with the Red Claws preparing for his NBA games. The G League has provided Tacko with significant floor time as he is averaging 26 minutes per game.

The center is averaging an impressive 16.0 points, 9.0 boards and 3.5 blocks on 77% shooting from the field. Fall produced back-to-back double-doubles in his first two G League games and matched that with a perfect shooting performance Sunday in a win over Raptors 905, hitting all nine of his field goal attempts. The real question fans are beginning to ask themselves are how well will this Green Giant match up against seasoned NBA players?

In pre-season and one regular-season game playing for the Celtics, he was far from sub-par. He is raw but determined to make it in the NBA. Tacko is a fan favorite, not only in Boston, but around the country. Chants of "We want Tacko" are a frequent occurrence wherever he goes.

Working alongside Tacko Fall is Boston's second-round draft pick, Tremont Waters. He too is playing exceptionally well averaging 19.3 points, 7.8 assists and 1.8 steals in 31 minutes per game on 45% shooting from the field and 39% shooting from deep. With these stats, both men have helped the team get off to an undefeated 4-0 record to begin the season. At this stage of his career, Tacko benefits being alongside a skilled facilitator, and he has one of Waters. 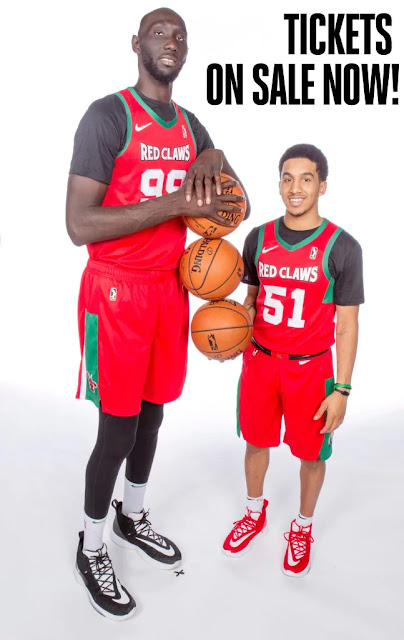 That's the long-and-short of it for this potent pairing. Both seem to have full-time, NBA potential, and we will be watching them as the G- League season progresses.