All the signs say "GO" for Celtics approaching the New Year

By Tom Lane December 23, 2019
After defeating the Charlotte Hornets 119-93 last night, The Boston Celtics have the third-best record (20-7, .741) in the NBA behind only the Milwaukee Bucks and Los Angeles Lakers. They have won three games in a row, and may see a completely-healthy roster very soon. All the signs say "GO" for this Boston squad. 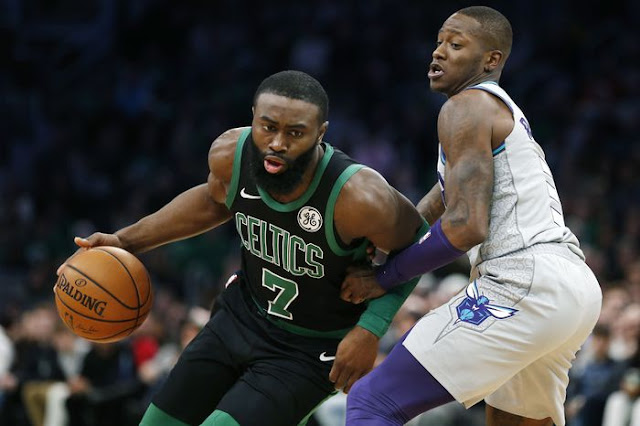 Where would Celtics be without Kemba Walker?

Was Kemba the right choice to replace Kyrie Irving, or what?!?! In last night's win, he poured in 23 points on 50% from the field and 46% on 3-pointers. For the season, he averages 22.6 PPG, 4.2 RPG and 5.4 APG. He is a tough cover for most opponents, and he opens up opportunities for his teammates. And the guy never stops smiling. What's not to like?


Both Jay Team members emerging at the same time!

Jayson Tatum's teammates went to his hot hand against the Hornets, and he emerged with a team-high 39 points and 12 rebounds. He and his running mate, Jaylen Brown, combined for 55 of Boston's points, in addition to 21 boards and seven assists. Therein lies the main difference from last season. The Jay Team has emerged as a rebounding-and-facilitating unit. They are hitting the boards and finding teammates at opportune times. Their surge has been a delight to watch.

This pass was beautiful pic.twitter.com/AHy4z86VvX

Gordon Hayward and Marcus Smart may be back in action soon

The initial reaction to Gordon Hayward's sore left foot was one of alarm. Our thoughts were, what if the left ankle surgery didn't work. Danny Ainge has assured us that the soreness is in no way related to Hayward's ankle injury from 2017. That is good news. Marcus Smart's double-eye infection turned out to be worse than originally thought, but he is expected back in the near future.


Grant Williams is earning a spot in the core rotation

Forget the 25-missed-treys-in-a-row from the start of the season. Brad Stevens has had confidence in Grant Williams from the beginning, and now the rookie forward is making his mark. In 22 minutes of action last night, he scored 12 points on 5-of-6 from the field and 1-of-2 from 3-point-land. He also grabbed 4 rebounds, passed off for two assists, and had one steal and one block. G-Will doesn't play like a rookie, and expect more from him entering the New Year.

We finally got to see 23 minutes of Romeo Langford last night. He scored eight points on 3-of-6 shooting (2-of-3 on treys), while taking down four rebounds. Carsen Edwards and Tremont Waters have formed a dynamic back-court duo for the G League Maine Red Claws, and I see both having a solid future in the NBA. Tacko Fall NEEDS be an NBA player for years. To say he is beloved everywhere he goes is to understate the issue. If he can continue to hone his skills, he could be virtually unstoppable.

The present and future both look bright for the Guys in Green. But could we find a bit of good luck this season. With a healthy core and solid bench, this team can go all the way. All they need is some good luck.