By Tom Lane December 11, 2019
Washington Wizards power forward, Davis Bertans, is getting a lot of attention around the League, and that won't diminish after his performance in the Wizards' 114-107 loss to the Hornets last night. Bertans hit 8-of-12 from 3-point land to score a career-high 32 points, while grabbing nine rebounds. 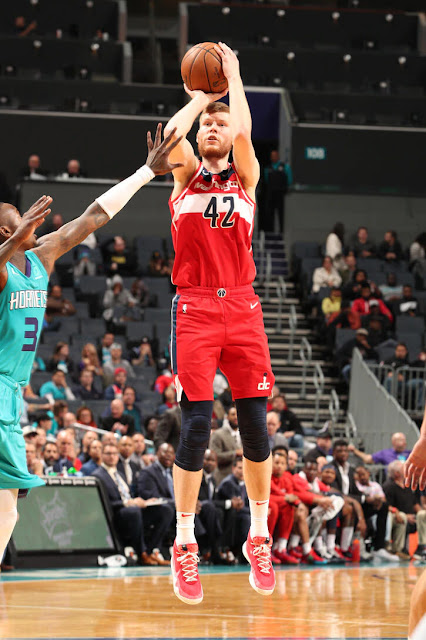 Davis was the 42nd pick in the 2011 NBA draft by the San Antonio Spurs but the Latvian big man didn't join the Spurs until the 2016-17 season. He is long (6'10") and has a masterful stroke from deep. The fact that he would fit seamlessly into any NBA lineup makes him a desired commodity. With John Wall out for the season, Washington is going nowhere. They will certainly be taking calls on the long-range sharpshooter, and the Celtics Danny Ainge will almost certainly be on the phone.

Wizards Davis Bertans is a 6'10" long-distance sharpshooter . The Latvian Laser is getting a lot of attention lately. Danny Ainge will be calling

For this season, Bertans is averaging 15.7 PPG on 46% shooting from the field, 46% on 3-pointers and 85% from the free throw line. The 27-year-old Latvian Laser is in the last year of his rookie deal, earning $7 million. The Celtics currently have no big man with anything close to Davis' accuracy from deep. Ainge would be very reluctant to part with the Memphis first-round pick in any deal, but Boston's own first-rounder would be a starting point.

Salary-matching should not be a major issue, but the longer-term brings some questions. Gordon Hayward has a player option for next season, and Jayson Tatum will be in the final year of his rookie deal. Danny really needs to at least make on inquiry on this kid. He has a high - and fairly quick - release. His ability to stretch the floor and open driving lanes for Tatum, Jaylen Brown, Kemba Walker and Hayward would be a huge bonus. I am confident that Danny will at very least give this one a shot.