By Tom Lane December 08, 2019
For those that have been following my tweet-turned-tornado journey, let me first tell you that the hundreds of cards and gifts for my great grandson, Carson Thomas Lane, have not stopped. They just keep coming. I can't even write about this without getting teary-eyed. I was only asking for one card from Carson's namesake, Carsen Edwards. Who knew?

A plea to Carsen Edwards @Cboogie_3. My great grandson, Carson Thomas Lane, lost his mom, Courtney, to Cystic Fibrosis on Friday at the age of 25. He loves getting cards & he needs an uplift. 123 Garden Dr., Apt. 2, Manchester, NH 03102. I would be forever grateful. pic.twitter.com/Bb2vj27rHq

My readers and Twitter followers quickly jumped on the tweet, and responses from Carsen Edwards and Marcus Smart came almost instantly. My idea to get Carson Thomas Lane, at age seven, into TD Garden with me, my wife, Linda, my daughter, Lisa Lane McCarty and Josh Farrell, Carsen's surrogate dad, hit a brief glitch when tickets were offered for a December 6th game versus the Nuggets, but the would-be donor failed to come through. We quickly purchased tickets for the game before they were no longer available, and that's when Celtics Reporter, Taylor Snow came to our rescue. He offered his assistance, and he came through beyond anything I would have expected.


I’m so sorry for your loss and condolences to your family. Let my man Carson know I have some stuff on the way to him right now!! God Bless! https://t.co/BJjRWDIWE9

Taylor acquired five guest passes to get us floor-side hours before the game on December 6th started, and he was with us all of the time, making sure everything went smoothly. That was vital. My daughter, Lisa, and I covered the BIG 3 games in Boston two summers ago and were treated by Garden Security as the reincarnations of Bonnie and Clyde. Let me add that Lisa is the Police Academy Director at Fitchburg State University and I am a retired Police Lieutenant. Not so this trip. We were in great company. That made all the difference.

Taylor Snow via Direct Message: "Thanks, Tom. I’ll touch base with Lisa this afternoon. I’ll be able to bring you all into the arena two and a half hours before tip-off and we can stay court-side up until the 75-minute mark. I spoke to Carsen yesterday and he said he’ll gladly stop over during his warmups."

Let me say that Taylor Snow is an understated gentleman who is highly-respected in Celtics circles. Thus, we were treated extremely well in his company. Snow's crowning achievement was having Carsen Edwards come over and interact with my great grandson. Carson was mesmerized - absolutely star-struck. Carsen Edwards, thank you for that visit. 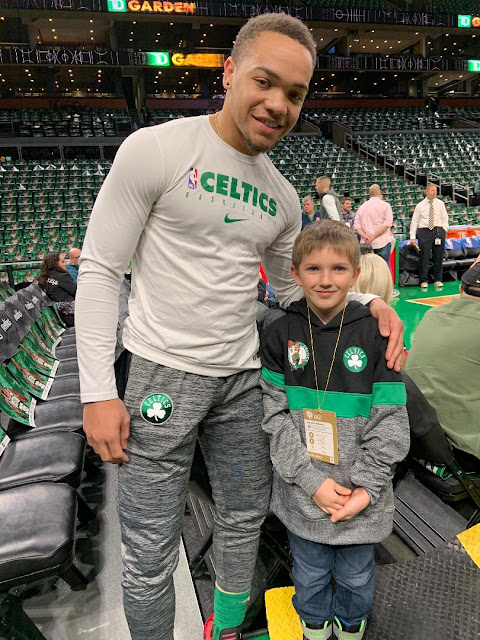 Because of our last-minute purchase, our seats were in the rafters, but Carson loved it, saying that he could almost touch the roof. The Celtics team - the excitement - the competition - the crowd's enthusiasm - he took it all in and participated. He sang along with the National anthem, joined in the "DEEEFENSE" and "Let's go, Celtics" chants but needed a little assistance getting in sync with the crowd.

We couldn't have picked a better game. The Jays were on fire from the start, and the contest had a lot of plays that fired up the fans and enraptured Carson Thomas Lane. And the Celts came away with the win against a tough opponent. An already-Celts fan was locked in. That's what I was hoping for. The Celtics team, and Taylor Snow and Carsen Edwards, specifically, came through big-time. Our entire family is indebted to the team and all of the folks out there that made our horrible loss much more endurable. Thank you all so much.