By Tom Lane January 16, 2020
The Piston's Derrick Rose played a significant role last night in handing the Celtics a 116-103 loss. He scored 22 points on 11-of-13 from the field - grabbed two boards - and handed out six assists. The NBA MVP (2011) and 3-time All-Star would be a fine addition to the Celtics over the second half of the season and playoffs. 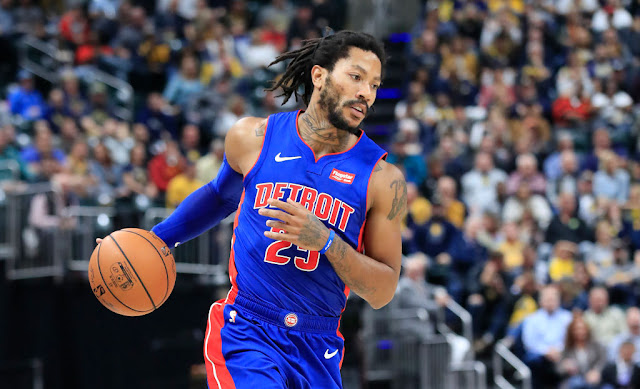 The Detroit Piston currently sit in 10th place in the Eastern Conference with a 15-27 record. Forward, Blake Griffin, very likely is out for the rest of the season with a knee issue, and it looks like Detroit is going nowhere this year. Detroit has made it known that many of the team members are available.

In a previous article, I wrote that the addition of a big man to the Celtics roster could happen, but acquiring another perimeter shooter is most-important. Rose fits that description, and he can play both back-court positions. And he is still only 30 years old.

He will earn $7.2 million this season, so his salary can be matched by Boston in any deal. According to the ESPN Trade Machine, Vincent Poirier and Semi Ojeleye-for-Derrick Rose works. A draft pick from Boston would almost certainly be required by the Pistons. Derrick is also signed for next season, and if his health can be maintained, he could be a significant addition going forward. And if Danny Ainge can pull off such a 2-for-1 trade, that leaves an open roster spot to potentially be filled with a big man via the buyout market.