Rethinking Enes Kanter covering the 5-spot for the Boston Celtics

By Tom Lane January 05, 2020
I admit to having been leery of Enes Kanter as a workable solution for the Celtics at the center spot. That has changed drastically. On the offensive end, he is a double-double machine that shoots a high percentage using his offensive rebounding and inside moves close to the hoop. Enes has learned Brad Stevens defensive schemes, and he has become a legitimate rim protector. 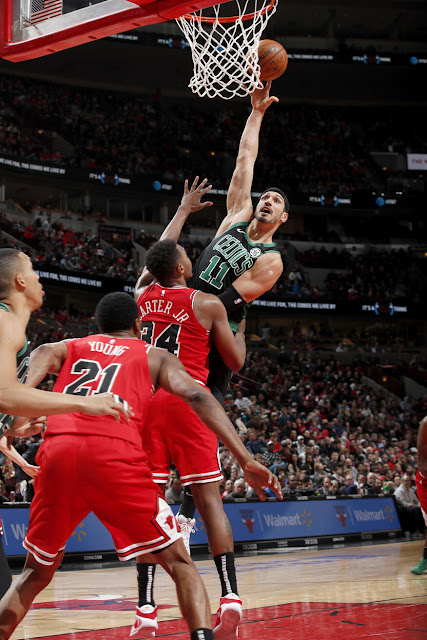 My first thought of Kanter coming to Boston was that Boston would be his fifth NBA destination since being taken with the third overall pick in the 2011 draft. NBA journeymen are normally viewed as having mediocre value - not stars, but not duds. Well, as we approach the midway point of the 2019-20 season, not only am I content with Enes holding down the 5-spot, I am starting to get excited by it.

Follow me on this. The NBA Player Impact Estimate (PIE) is an indicator of how much impact, negative or positive, a player has on the court. For the 13 games he played in during the month of December, Kanter is ranked 16th in PIE - right behind Nikola Jokic (12), James Harden (13), Lebron James (14) and Anthony Davis (15). And he averaged 1.3 blocks per game for the month. Prior to this, he never averaged more than 0.5 blocks/game in any season.

I will add that he has accomplished all of this while only playing 18.7 minutes per game in December. Last night, in Boston's win over the Bulls, he put up 17 points, 12 rebounds (6 offensive), one steal and two blocks. Brad Stevens brings out the best in his troops, and that is certainly the case with Kanter. But I give kudos to Enes for his work and progressions. After a sluggish start, he now fits seamlessly into the Celtics offense and defense, and he seems to be having a good time out there. It is a pleasure to watch.