By Tom Lane February 01, 2020
"Trader Danny" Ainge avoids mid-season trades like the the plague, but this February 6th deadline may see that trend change. It is all about timing. If Ainge passes the deadline by without any moves, putting all of his chips on potential buyout candidates is simply too chancy. Players that are bought out and waived may already have a team other than the Celtics in mind. Here are some thoughts: 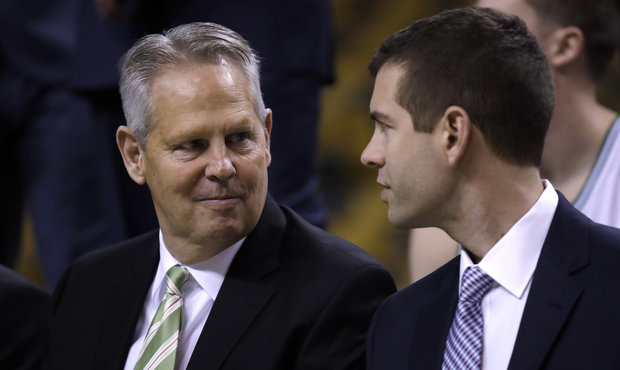 Nix on this one! Gordon has deferred to his teammates this season, but has stepped up when the injury bug hit. In the last four games, he is averaging 36.3 MPG, 24.8 PPG, 9.3 RPG and 2.8 APG, while hitting 56% of his field goals, 47% of his 3-pointers and 91% on free throws. In what is, in effect, a contract season (player option for 2020-21), he has stepped back to allow the Jay Team to do their thing. But with Jayson Tatum out for several games, and playing limited minutes in the last contest, Hayward took over. He will do the same in the post-season, if required. Gordon needs to stay.

This potential move also gets a "no". The 6'5" guard has been on the injured list quite often, but that is not the major issue. His impending contract extension is the issue. He is eligible for an extension to his rookie contract this off-season, and it is quite probable he will be earning something in the $18-20 million/year range. With Jaylen Brown already extended, and Tatum coming up for one - this move would make little sense.


How about the Thunder's Nerlens Noel

This is a move worthy of Danny's attention. Brad Wanamaker for Noel works on ESPN's Trade Machine. The incentive for Oklahoma City to bite would be a first-round pick in the 2020 NBA draft. Whereas Kennard would not have helped Boston's chances in the post-season, Noel would. He is a quick, mobile 6'10" center/PF that scores on lobs and put-backs, while doing solid work on the boards as a rebounder and rim protector. For those that may question the loss of Wanamaker, the buyout market or free agency may produce that third-string point guard. And although many do not regard Marcus Smart as a pure point guard (He is not a pure "anything"), he does a damn good job at facilitation - as does Gordon Hayward.

The Dallas Mavericks have apparently offered Courtney Lee and a second-round pick for Iguodala but the Grizzlies are awaiting something better. He would fit seamlessly onto Boston's bench, but matching his $17.2 million salary is a deterrent for Danny.

This is all about timing, bluffing, posturing, waiting and hoping - in other words, it is right up the alley of Boston's Riverboat Gambler, Danny Ainge. The trade deadline is 3:00 PM ET on Thursday, February 6, 2020. Does he make a pitch for Nerlens Noel? Or Iguodala? Or does he bypass the deadline and gamble on the buyout market. With the playoffs in mind, and the dollar-limitations involved, trying to acquire the local product (Malden and Everett, MA), Noel, in the next five days may be the right path. The Celtics 11-year Title drought has to be weighing heavy on Danny's mind.