Danny Ainge knew Kevin Garnett was The Ticket to a Title

By Tom Lane February 15, 2020
Danny Ainge came to the Boston Celtics in 2003 as Executive of Basketball Operations, and by 2007 his hunger for an NBA Title as a member of the front office had peaked. Even with Paul Pierce on the roster, a Championship was not going to happen any time soon, so Ainge saw his Ticket-out-of-Mediocrity in the guise of Minnesota superstar, Kevin Garnett. 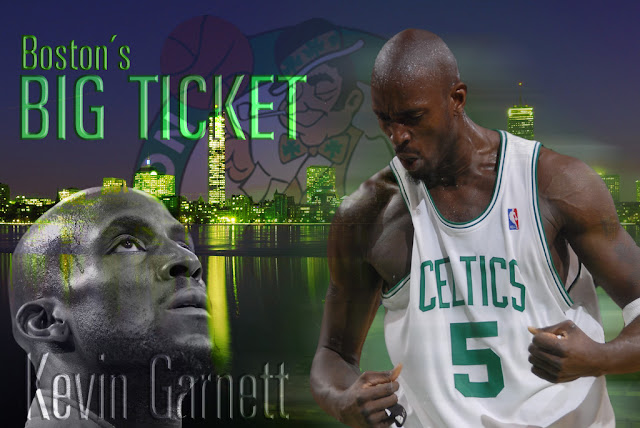 But Kevin wasn't going to leave Minnesota for just any destination. He wanted a Title as much as Ainge, but Garnett knew that Pierce's entourage was insufficient to get that done. Well, along came sharpshooting guard, Ray Allen, via trade, and the stage was set for The Big Ticket to come aboard.

Kevin didn't come cheap. Rising star, Al Jefferson, and youngsters Sebastian Telfair, Ryan Gomes and Gerald Green - in addition to Theo Ratliff - were sent to Minnesota - leaving the Celtics roster wealthy in talent but sparse in numbers. Retired star, Reggie Miller was close to being talked out of his life of leisure to join the ranks but ultimately decided against it. But Ainge did succeed in bringing Eddie House, P. J. Brown, Sam Cassell and James Posey into the mix, and The Green were off and running.

Pierce usually led the offensive attack, hitting from deep and driving into the fray - something he had done since coming into the League. Garnett did a lot of everything, but one of his main functions was to direct the defense - and he did it with the same incendiary intensity that never wavered. Ray Allen's marksmanship kept opposing defenses honest and allowed both The Captain and the Big Ticket to operate inside.

Center Kendrick Perkins was now on a perfect team for what he brought to the group. He rebounded the ball and provided inside defense and toughness, while not needing to put up a lot of points. Second-year-man, Rajon Rondo, with Sebastian Telfair and Delonte West gone via trades, took over the starting gig at point guard and did very well.

The Celtics finished the regular season with a 66-16 record and eliminated the Los Angeles Lakers in six games to take home their first Championship in 22 years. There may never have been an NBA player that consistently played with the same level of intensity displayed by The Big Ticket - although Marcus Smart does come to mind.

With a surprise video, the Celtics announced they will retire Kevin Garnett’s No. 5 jersey next season. pic.twitter.com/vqpJwrAbXs

Kevin's number-5 jersey will be retired by the Celtics next season and be displayed next to Paul Pierce's number-34. The Captain and The Big Ticket together once again. You can almost hear Garnett's cry to Pierce, "O Captain, My Captain --- the prize we sought is won".