By Tom Lane February 14, 2020
Flashback to January 12, 2019 - Boston Celtics trailing Orlando Magic, 105-103 - Gordon Hayward inbounding the ball with less than three seconds remaining in the game - Gordon gets the ball to Jayson Tatum who misses the 3-point attempt. Kyrie Irving, clearly upset by Hayward's choice of a target, yells at Gordon, who contends that Jayson makes that type of shot most of the time. Well, Gordon's vision of Tatum becoming Boston's go-to scorer was on display in the Celtics double-overtime 141-133 victory over the Los Angeles Clippers last night. 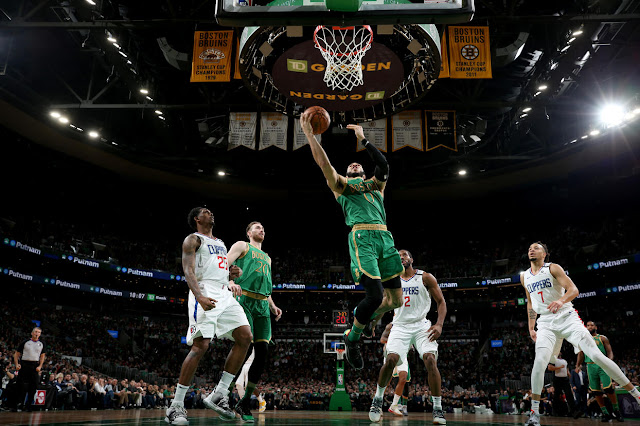 Who would’ve ever predicted the incredible greatness #JaysonTatum is showing right now, just his 3rd #nba season? He’s an absolute force for #celtics You have to go back to maybe #LarryBird to find a #boston player this advanced at such a young age. Wow! #allstar ☘️✨

Jayson logged a team-high 47 minutes and poured in 39 points on 61% accuracy from the field and 50% on 3-pointers, all while taking down nine boards. It seems like Tatum has always been able to get a decent shot off at the NBA level, starting in his rookie year. But he has worked on his game, and it shows. Accolades to Gordon Hayward for his early faith in Jayson, and for being the steadying influence once supplied by the departed Al Horford.