By Tom Lane February 04, 2020
When Jaylen Brown failed to make the NBA All-Star roster, he never whined - while some others did just that. Well, it didn't take long for the league to partially rectify the slight. Jaylen has now been named Eastern Conference Player-of-the-Week. 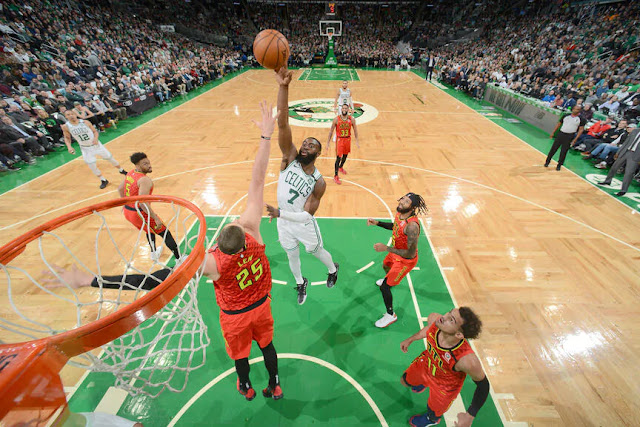 This is why I love Jaylen Brown!!! MFs didn’t vote him an All-Star and now he’s going to make the League Pay!!! I’m loving his Passion right now. 👌🏾

Brown's Jay Team sidekick, Jayson Tatum, was one-of-two Celtics Players (Kemba Walker being the other), and a number of fans believe both Jays should have been included. Coach Brad Stevens had some thoughts on Jaylen's selection as Player-of-the-Week:

“I thought it was a no-brainer that he got it,” Stevens said. “I haven’t watched the whole rest of the league. That’s probably not fair. But he was awesome in all three games, and I thought that Miami game he set a tone with his defense, and then his offense followed suit. I thought he was good against Golden State and then I thought same thing against Philly. His defense was excellent and then his offense followed suit. He’s a really good player. We’ve talked the whole time about those awards are wonderful, but they’re subjective, so you shouldn’t wrap your value or identity around those things. Those are nice to put into a bookshelf, but that’s about it. So I’m really happy with how he’s attacked it, and I’m happy with how Jayson’s attacked it since he was named it. It’s not the end-all, be all. You just play the next game as hard as you can.”

Brad, never one to overstate an issue, gave Brown significant accolades in his analysis. Jaylen deserves the plaudits. Celtics fans are indeed lucky to have the Jay Team emerging as NBA stars in the same season. And the best part is that they haven't peaked yet.