By Tom Lane February 19, 2020
Celtics center, Rob Williams, has been out of action with a hip edema since December 6, but he is scheduled to be back on the court very soon. His performance during the remainder of the regular season will have a major influence on Danny Ainge's plans for his team come the off-season.

Rob Williams on workout: "There was no limit on my jumps. I could dunk as much as I want, run as much as I want. It’s really like the first time they haven’t been telling me I can’t jump, or you only get 20 jumps...Being as explosive as I remember I was is just a great feeling."

The question remains whether the 26 NBA General Managers got the right read on Williams III when they passed him by in the 2018 draft, or did Boston get a gift handed to them with the 27th pick. Is Rob simply a super-athletic novelty or a legitimate NBA-level rotation guy? We just don't know for sure, and Rob's months-long layoff almost certainly has set his progression back a notch (per Wikipedia):

Come the 2018 NBA draft, instead of being a lottery pick, Williams fell to the 27th overall pick where he was selected by the Boston Celtics due to concerns about his work ethic. On July 5, 2018, the Boston Celtics signed Williams. Williams did not initially make a good impression, being criticized for showing up late and missing team functions.

Williams was twice named SEC Defensive-Player-of-the-Year (2017, 2018), and that might suggest that the cited "lack of work effort" may be incorrect. He certainly has shown flashes of talent when given the chance. In fact, he could be just the near-perfect center/forward for a Celtics team loaded with shooters and versatile wings. Williams can certainly fill the role of rim protector, while grabbing a decent number of rebounds, scoring on lobs and put-backs, and covering the perimeter. And his passing skills have been a pleasant surprise to many.

Ainge has to ask himself if Rob Williams can be the Celtics primary center down the line. Or at least can he be an 18-20 minute backup at the center and power forward positions? The Celtics have questions about the 5-spot this off-season. Daniel Theis has a team option hanging over his contract for next season, and Enes Kanter has a player option on his deal for the 2020-21 season. And Brad Stevens has employed 6'6" rookie, Grant Williams, at the center position with decent results. 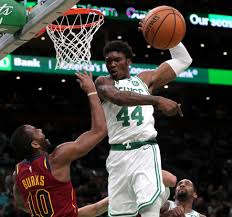 Rob seems eager to get back to work. The Celtics have already picked up the option on Williams' contract for 2020-21 at just over $2 million, and they have an option for 2021-22 at $3.6 million. These figures will be bargains if Williams III fulfills his promise as an NBA regular, and the low dollar-figures would be welcome on a team trying to pay its present, and future, stars in the bodies of Kemba Walker, Gordon Hayward, Jaylen Brown and Jayson Tatum.

Boston's remaining 28 games should clear some of the fog hanging over Danny Ainge's impending summer-of-decisions. A solid, consistent showing by Rob Williams should make things less cloudy for Ainge as he decides who stays - who goes - and what potential deals might present themselves this off-season.