By Tom Lane March 24, 2020
Whether you like Kyrie Irving or hate him, when he came to Boston in 2017 he may have been the most-dangerous players with the ball in his hands of any point guard in the League. He put his skills on display early in his stint with the Celtics when Boston traveled to Dallas on November 20, 2017 to take on the Mavericks. The Celtics won the game in overtime, 110-102, largely on the supreme play of Irving.

Kyrie came away with 47 points, three rebounds, six assists - scoring 10 of his points in the overtime period. He shot 16-of-22 from the field, 5-of-7 from beyond the arc and 10-of-11 from the free throw line. His plus/minus of plus-21 was a team-high (per NBA's Dave Jackson):

In the extra period, Irving scored his team's first six points. Then after Jaylen Brown gave Boston a 104-102 lead with a jumper with 1:39 to play, Irving went to work on Yogi Ferrell, backing him down and drawing contact on a lay-up with 48.5 seconds to play. Though Irving missed the free throw to keep the score 106-102, Dallas never got closer. 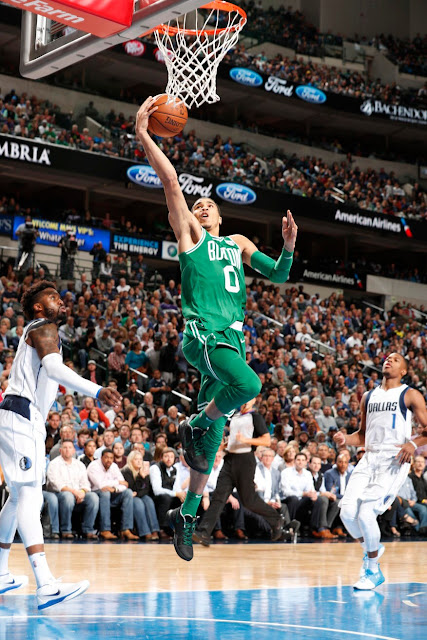 Irving was almost unstoppable in this game, and the performance gave Boston fans some real hope for the future. Both Kyrie and Al Horford are gone, but the hope remains. Kemba Walker has ably replaced Irving as Boston's go-to point guard, and Daniel Theis has emerged as an effective center in place of Horford. Jaylen Brown and Jayson Tatum have proven themselves as true stars this current season, and their combined 37 points and 18 rebounds versus Dallas in that contest displayed their potential.

In November of 2017, Marcus Smart still had not cured his poor shooting tendencies, hitting only 3-of-15 from the field and 2-of-11 on treys, but he added three boards and eight assists, coming away with a plus/minus of plus-15. Despite his errant accuracy in this one, Marcus did hit a critical 3-pointer with 1:24 left in regulation to bring the Celtics within two points of Dallas and a score of 96-94.

Kudos to Danny Ainge for a quick and effective rebuild-on-the-fly following the departure of both Irving and Horford. As potent as Kyrie looked in the Dallas game, the following 2018-19 season for Boston turned out to be one of turmoil and bickering. In the end, the 2018-19 group proved to be a bad mix. Not so the current Celtics crew. They are very talented one-through-six, but there are concerns about how the League shut-down will effect the progression of the bench players, most of whom are youngsters. Still, in the Dallas contest, beyond the starting-5 and Smart, the Celtics bench only managed three points, all scored by Terry Rozier on 1-of-4 shooting. More hope for this season - if it ever gets restored.