With Brady all-but-gone, will Jayson Tatum be the future darling of Boston fans?

By Tom Lane March 19, 2020
With 6-Time Champion Tom Brady possibly heading out of town to join to join the Tampa Bay Buccaneers, what player from what Beantown team has the best shot at replacing him as the darling of Boston sports?

Bucs and Tom Brady still trying to finalize contract language as of Wednesday night and those discussions will go into Thursday, per source. Contract language more challenging this off-season than any time in recent memory. No problems forseen with Bucs-Brady, but no deal yet.

Red Sox icon, Ted Williams, was truly beloved in his time and still revered enough many decades later to have a Boston tunnel named after him. For the Celtics, Larry Bird captured the hearts of Boston fans, winning three Titles and putting his heart and soul into his game. The Bruins Bobby Orr only picked up two Stanley Cups in his stint with the Bruins, but he was one of the most-adored pro athletes in The Hub, despite his shyness and avoidance of the press. But it was Brady that captured the hearts of Boston fans and will leave them with mixed feeling over his departure.

I will make a case for the Celtics Jayson Tatum to transform into the next favorite of Beantown fans. Born in St. Louis, Jayson Christopher Tatum came into the NBA at the age of 19 after his one-and-done stint at Duke University.Taken by the Celtics third-overall in the 2017 NBA draft, Jayson notched 14 points and 10 rebounds in his League debut. Ironically, Bird had produced the exact numbers (14 points, 10 rebounds) in his first game for Boston 38 years earlier. 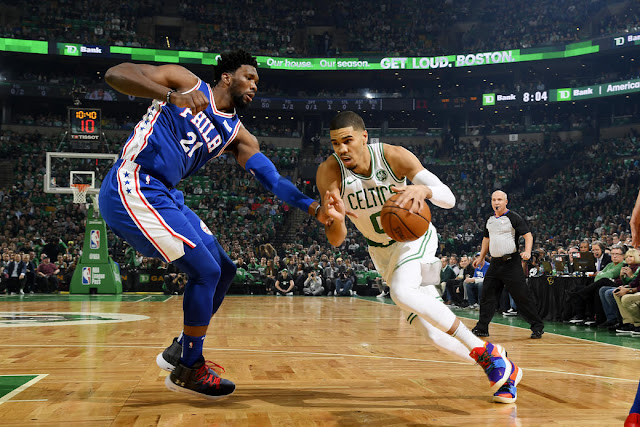 Tatum made the All-Star game this season, his third in the NBA, while Larry made it during his first year in the League. But it must be remembered that Jayson recently turned 22 years old, while Bird was approaching the age of 23 at the start of his rookie year.

"Jay Smooth", as some are starting to call him, is an absolute star-in-the-making. This season, he is averaging 23.6 PPG, 5.9 RPG, 2.2 APG and 1.1 SPG. He is hitting 46% of his field goals, 40% of his 3-pointers and 83% from the free throw line. He came to the NBA with a reputation as a shooter, but he has become much more than that. His defense, rebounding and facilitation have all emerged, and he has become a complete player.

But you don't become a darling of the fans in Boston without major accomplishments, and that includes Championships, All-Star votes and Most-Valuable-Player awards. Dedication to the game and hard work also seem to be required by fans in The Hub if a player wants to be truly beloved by The Beantown Bunch.

Jayson will need to separate himself from the pack if he wants revered status in Boston, and that means soaring above his comrades, Jaylen Brown, Marcus Smart, Gordon Hayward and Kemba Walker. And a few NBA Titles wouldn't hurt. Tatum has the tools to become Boston's next Beantown Darling. Whether he achieves that remains up to him.